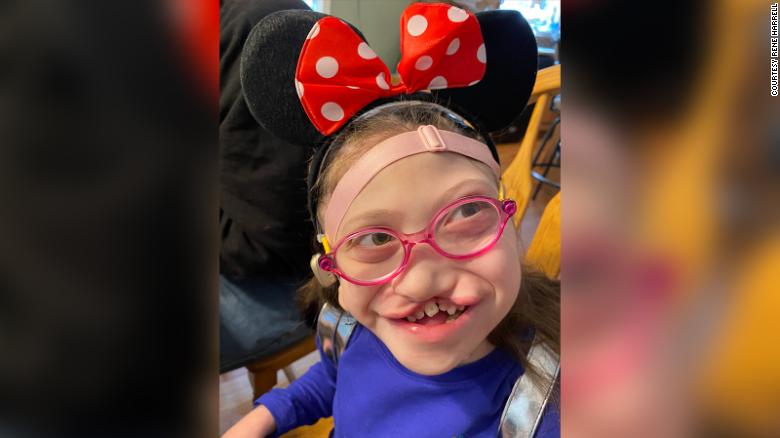 Seraphina Harrell was conceived via surrogacy and spread joy to everyone she met in spite of her disability.

In 2012 an ultrasound revealed that the child carried by a surrogate mother, Crystal Kelley, had a number of severe birth defects — a cleft lip and palate, a cyst in her brain and serious heart defects.

The intended parents, who lived in Connecticut, already had three children conceived with the help of IVF but were desperate for a fourth child, but not one with serious health issues.

The mother was crying,” Kelley recalled later. “They said they didn’t want to bring a baby into the world only for that child to suffer. They said I should try to be God-like and have mercy on the child and let her go.”

Kelley was offered US$10,000 to have an abortion, however, She refused. The parents’ lawyer followed this up with a threatening letter which said: “You are obligated to terminate this pregnancy immediately. “You have squandered precious time.”

Believe it or not, he really wrote that. He also reminded her that she had signed a contract in which she had agreed to abort her child “in case of severe fetus abnormality”. The parents would sue to recover the money they had already paid – about US$8,000 — plus all of the medical expenses and legal fees.

Ms Kelley fled to Michigan where she would have excellent medical care and be deemed the legal mother when the child was born, not the genetic parents.

She later adopted Seraphina out to the Harrell family, in Massachusetts, who already had seven children.

Seraphina was born with heterotaxy syndrome. Many of her internal organs, such as her stomach and liver, were in abnormal places. She had several heart defects and two spleens, neither of which worked properly.

She also had a brain malformation called holoprosencephaly, in which the brain fails to completely divide into distinct hemispheres. During her short life, she had three heart surgeries and many minor surgical procedures.

However, Seraphina was not an unhappy child.

“What drove the conflict when Crystal was pregnant with her, was whether or not she’d have a meaningful life,” her adoptive mother, Rene Harrell, told CNN. “And I think without hesitation, the answer to that question is yes, she did. Seraphina had a very, very meaningful and happy life.”

“What I heard over and over from so many of her doctors was they could never imagine that someone with Seraphina’s level of need could do as well as she did or be as joyful as she was,” her mother said.

Seraphina could only speak a few words, but she learned American Sign Language. Her favourite sign was “I love you.” She couldn’t walk but she mastered moving around in her wheelchair.

“Her joy and excitement over the simplest things were the best part of everyday life,” her family wrote in her obituary. “There wasn’t a single morning at home where she failed to express a delighted astonishment at the very idea that she was now awake. There wasn’t a single evening that she didn’t drop everything and insist on being held by her father as soon as he came home from work.”

That mad old English poet William Blake famously wrote that it was one of the “Auguries of Innocence” to find joy in every detail of life:

To see a world in a grain of sand
And a heaven in a wild flower,
Hold infinity in the palm of your hand,
And eternity in an hour.

Did all those doctors, and geneticists, and counsellors, and lawyers who urged Seraphina’s mother to have an abortion give more joy to the world than she did? Unlikely. For them some other words from Blake may be a good fit: “Kill not the moth nor butterfly, / For the last judgement draweth nigh.”

“Sadness is not the defining sum of Seraphina’s story,” her family wrote. “Love is.”

Editorial Team
Fertility Road aims to inform and inspire in a way that is direct, honest and empathetic, whilst breaking down the science by being written by top experts from the fertility field.
Prev8 arrested in Russia’s First Surrogacy Probe
Surrogacy In The UK Is Legal Provided The Legal Framework Is Strictly Complied WithNext