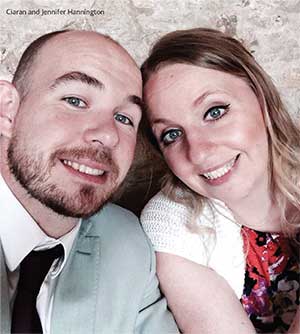 Ciaran, 29, and Jennifer, 28, are from Ampthill, Bedfordshire. Ciaran is a primary special educational needs teacher, and Jennifer is a health visitor.

How did you meet?

Ciaran: Originally we met in WH Smiths where Jennifer worked, and I asked for a book! I was also going to ask for Jennifer’s number on her return with the book, but she palmed me off on another member of staff!
We met again years later in Sussex and immediately recognised each other but couldn’t remember where from. It was three months into the relationship when I suddenly remembered… and I still have the book I asked for!

How long have you been trying to conceive?

Ciaran: We married in December 2011 and started actively trying soon after this point.

We began the process for fertility treatment in 2012 and, eventually, after lots of tests and a 12-month wait for funding, we were told our only option was ICSI as the consultants didn’t think it was worth trying ovulation induction. We had our first ICSI cycle in January 2014.

Ciaran: Wellman Conception for the first couple of cycles then Proxeed Plus.

Ciaran: They have always indicated severe oligozoospermia (low sperm count). The andrologist has suggested we use a supplement of our choice – we suggested Androferti which he said he would be happy with us using.
We are happy to use it for three or six months prior to the cycle – we are looking at beginning the cycle towards the end of the year.

Jennifer: The journey through fertility treatment is a rollercoaster. At the very beginning when we received Ciaran’s first semen analysis results, it felt like a massive kick in the stomach to be told that the results were lower than needed to commence ovulation induction.
Since then we’ve had times when we have felt so confident that we are on this journey for a reason and we will see a positive outcome, however there have been other times that we have both thought ‘Why us? What have we done to deserve this heart-wrenching journey?”
Ciaran: To get through the rollercoaster you have to really pull together, talk about what you are going through and explore each other’s feelings, otherwise you could quite easily sink to a very low place. Thankfully, we both feel we are in this together and we are here to support each other.
Jennifer: We often find that one of us will feel negative about the situation and the other one will be in a positive mindset, and that helps as the positive one always helps to remind the other that we are doing this together and, whatever the outcome, we will both be there at the end holding each other’s hand and knowing there has to be a good reason for all this.

What changes would you like to see in the NHS and/or private clinics to make fertility journeys such as yours easier?

Jennifer: One of the hardest parts is the financial burden of treatment and having to make decisions based on the funding you can get or whether it will be privately funded.
Offering fertility fairness, meaning all CCGs (Clinical Commissioning Groups) follow the NICE guidelines, is something we both feel very strongly about.
Ciaran: We’ve been very lucky to be funded for the full quota that NICE recommend, but know so many people who have been offered just one cycle or even no cycles on the NHS.
Another thing that would make this agonising journey easier would be to offer reasonably priced treatment – at present the costs are huge, bearing in mind you cannot be guaranteed a positive outcome. These huge costs equate to pressure felt by couples who are already desperate for a positive outcome.

Finally, by offering all necessary procedures and treatments to give the best possible outcome, it would possibly make journeys less stressful and hopefully provide higher success rates.

Jennifer: For our NHS-funded cycles, we opted to have an endometrial scratch which was something we had to pay for privately.

We have also been offered intralipid intravenous infusions, again which are not covered by the NHS funding.

Androferti would not be funded by the NHS either. Surely by funding all necessary additional treatment this may equate to a positive outcome rather than having to repeat cycles?

What changes would you like to see in society to make fertility journeys such as yours easier?

Ciaran: Better education. Fertility isn’t something that many talk about, therefore when people are open and talk about their fertility issues, others often feel embarrassed and end up saying what they think will help, such as, “If you relax, it will probably just happen” or “It will happen when the time’s right”.

Both these statements are painful for those already on this journey. There is still a taboo about male fertility – we have noticed throughout our treatment cycles, many friends, family and colleagues have assumed our infertility is down to Jennifer.
Bringing male fertility out into the open and removing the stigma will help men going through this process to understand this isn’t something to be ashamed of.

It’s so easy to think we are the only couple experiencing this, however we have made some fantastic friends along the way, and so many people have confided in both of us that they or someone close to them have also had fertility treatment.