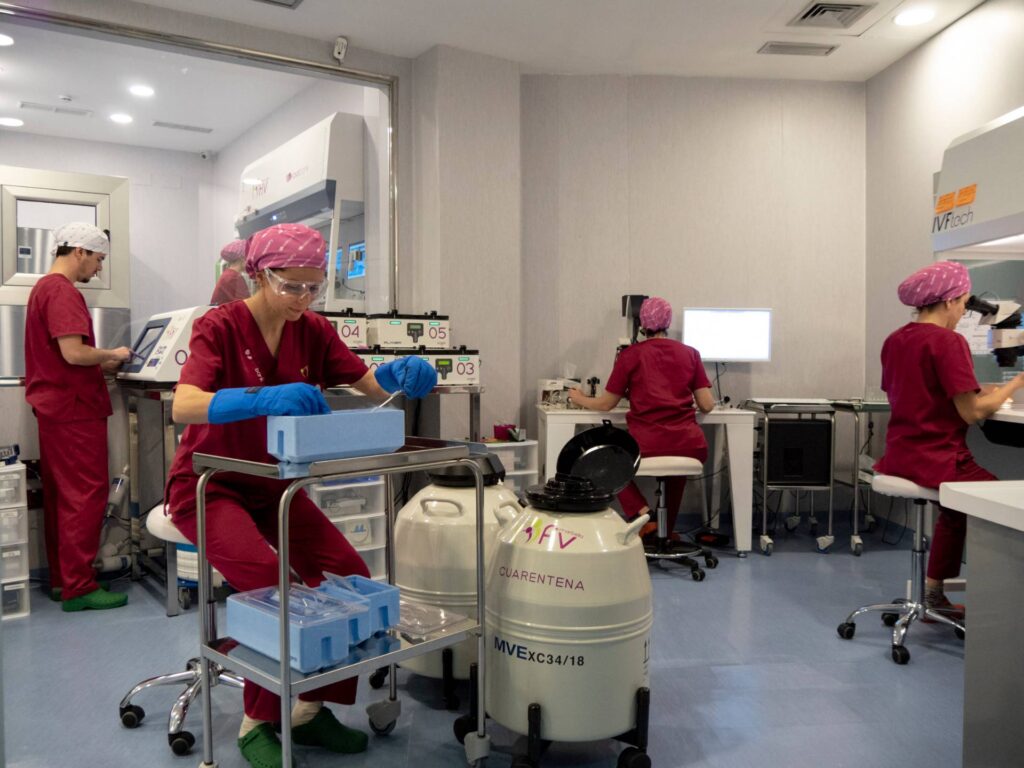 How does sperm quality affect pregnancy?

Often, when we talk about infertility, we automatically associate it with the female factor. This is normal, given that age has a much more negative effect on the reproductive capacity of women than on that of men. But the reality is that sperm quality also greatly influences the chances of achieving a pregnancy. Not surprisingly, it is the father who contributes 50% of the genetic material that the future baby will receive.

Specialists increasingly have more evidence that the quality of semen not only affects successful fertilization, but also the possibility that, once a pregnancy is achieved, it will be on-going and culminate in a live birth. Research suggests that around 40% of cases of infertility in couples are caused by an exclusive male factor. For this reason, fertility investigations carried out on couples who are having trouble conceiving take into account the reproductive capacity of both partners.

But quantity does not always mean quality. Even if we have a normal sperm count, a high number could have reduced motility. In this case, we would be talking about Asthenozoospermia; which is when less than 30 or 40% of the sperm in a sample have a normal motility, meaning they are unable to travel through the cervix into the uterus and into the tubes to reach the egg.

But the most serious case would be Teratozoospermia, which is when more than 96% of sperm have abnormal morphology. Teratozoospermia not only affects the sperm’s ability to move through the uterus and adhere to the membrane of the egg, but it also increases the risk of no fertilization and of miscarriage, especially during the early weeks.

These issues are asymptomatic, so the patient is unaware of them until he sees a fertility specialist after months or even years of trying to conceive naturally with no success. However, all of them are detectable by microscopic analysis of a seminal sample.

Alterations that affect sperm DNA are more complicated to diagnose. This DNA, contained in the nucleus of the cell, contains all the genetic information that the future baby will receive from his father.

DNA is present in the form of two parallel strands. Sometimes these strands suffer breaks during sperm production or storage, which is known as ‘DNA fragmentation’. This fragmentation can be single-stranded or double-stranded.
Single-stranded breakage is associated with reduced conception rates. On the other hand, the double-stranded breakage does not affect the fertile capacity of the sperm, but increases the risk of implantation failures and miscarriage.

What solutions are there?

Lifestyle, poor eating habits and lack of physical activity, among other factors, have led more and more men to have a fertility problem. The good news is that the advanced assisted reproduction techniques that are currently applied allow us to obtain healthy sperm even in cases of Azoospermia, Teratozoospermia or sperm DNA fragmentation.

When a couple with fertility problems attend a fertility clinic, both members undergo various tests to assess their reproductive capacity. In the case of man, a sperm analysis is performed, in which a specialist analyses the semen sample to measure sperm concentration, morphology and motility.

If the concentration of healthy sperm is too low, ICSI could be used to fertilize the eggs. With this technique, the embryologist selects the most suitable sperm within a sample, based on characteristics such as morphology and motility, and injects them into the eggs using a special micro needle.

In the event that no sperm are found in a semen sample, current techniques allow them to be obtained directly from the testicles through the so-called ‘sperm recovery techniques’. This allows us to offer patients with Azoospermia or who have undergone a vasectomy the possibility of conceiving without resorting to donor semen.

The simplest method is puncture extraction. A very fine needle is used that is inserted through the scrotum to aspirate the fluid that contains the sperm. If this does not work, a biopsy will be performed to remove a portion of testicular tissue, this being the safest method to find good quality sperm.

If, despite having physically healthy sperm, fertilization has not been achieved or repeated miscarriages have happened, the problem could be a high rate of sperm DNA fragmentation. These issues in the genetic information are not distinguishable under the microscope, so other diagnostic techniques are needed.

In Spain, the Comet test has started to be more widely used; this is currently one of the most advanced tests for the detection of sperm DNA fragmentation. It allows diagnosing of single-stranded and double-stranded breaks from the same sperm sample.

Several studies have shown that, often, the oocyte itself is able to compensate for sperm DNA damage when this affect a single strand, allowing for pregnancy to develop normally. However, this does not occur when the alterations affect the two strands, which forces us to apply advanced sperm selection techniques. Among them we use Fertile chip™, a device that allows the separation of healthy sperm from the rest for use in an ICSI. Unlike other techniques, such as sperm centrifugation, with the Fertile chip™ we do not run the risk of causing gamete damage. 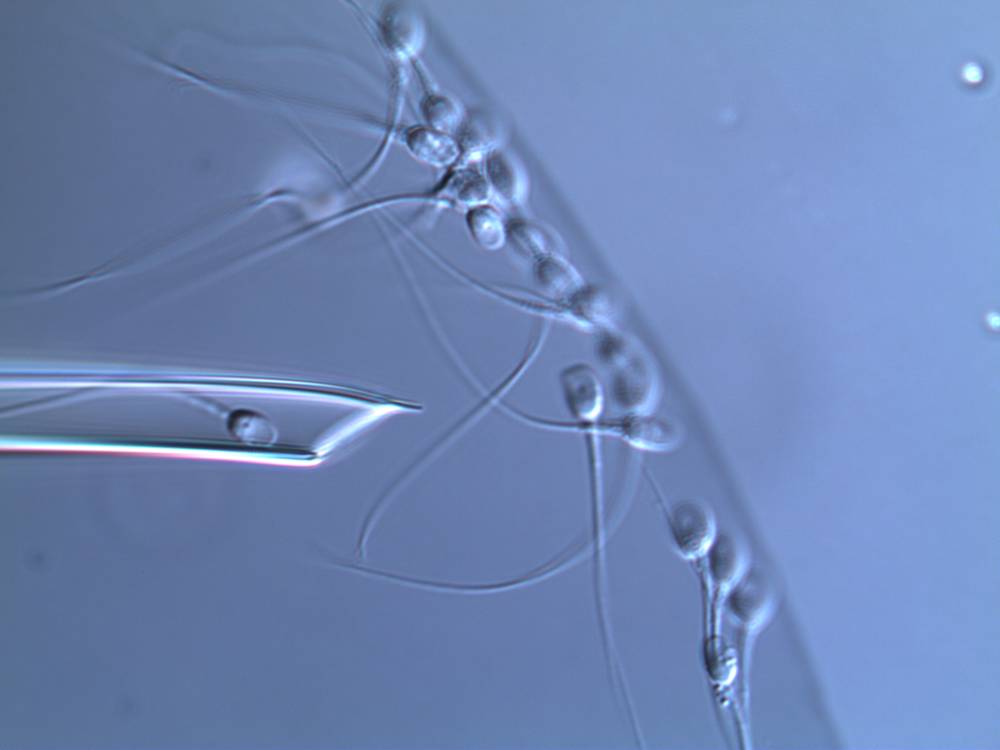 Adequate sperm selection for assisted reproduction treatment should be as accurate as possible, to maximize the chances of success. For this reason, in FIV Marbella we have a specialized andrology laboratory, composed of professionals who rigorously analyse all semen samples to offer our patients the peace of mind they need.

In addition to the techniques described, in FIV Marbella we have implemented a selection method called ‘triple sperm selection’, which allows us to choose sperm for a totally objective assisted reproduction treatment.

In triple sperm selection, sperm are subjected to the technique of MACS (magnetic Activated cell sorting), which allows us to separate healthy cells from those that have started their cell death process, start of the process that will lead to sperm fragmentation. Next, the sample is deposited on a plate with hyaluronic acid. Those sperm that have completed their maturation process will stick to the acid, allowing us to distinguish them from those less suitable for fertilization. Finally, our specialists will select the most suitable sperm to perform an ICSI. This method combines the criteria of our specialists with completely objective selection techniques, increasing the chances of success of our treatments.

At FIV Marbella we put all our resources at your disposal to make your fertility treatment abroad as comfortable as possible. Get in Touch via our website fivmarbella.com.

Editorial Team
Fertility Road aims to inform and inspire in a way that is direct, honest and empathetic, whilst breaking down the science by being written by top experts from the fertility field.
PrevHow to stop thinking it’s your fault
Are you fit for Fatherhood?Next