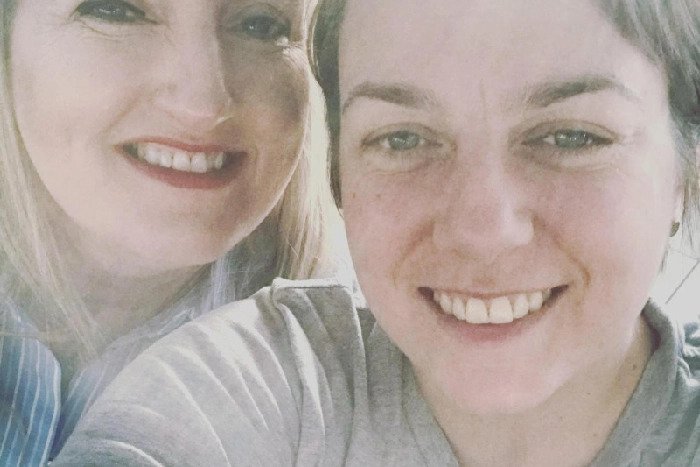 Carla and Debi Sweetman-Kerr, from Mawsley, near Kettering, have been together for six years and are trying to start a family but fertility issues have hampered their plans.

Carla, 32, said: “With my wife being 16 years older than me and having a previous fight with a rare form of cancer, her ovaries aren’t any use, so it was always going to be me that carried our children.”

Carla said the couple are now facing the idea that this might not be possible because of her history of endometriosis and polycystic ovaries.

They cannot qualify for IVF on the NHS because being in a same-sex couple they do not fit the requirements to prove infertility so they are fundraising to go privately.

She said: “I have always had problems with painful periods and stuff like that.

“When I was at school, I used to have really terrible periods, it was brutal. That carried on into my late teens.

“It’s crippling the pain I’m in, it affects most parts of my life.”

Some women struggle to get diagnosed with endometriosis and Carla said it did take a while to get referred, but now her long history with the condition means she is taken seriously.

“It causes adhesions that stick to anything and everything. It’s like a big elastic band. They suspected it had started to adhere down because I was in so much pain, but there’s no scan that can pick that up.”

Carla had her first operation to investigate her endometriosis aged 20 in about 2009.

She said: “There was nothing mentioned about fertility. Maybe it was not as severe then but you would have thought they might give you a little bit of a heads up about what could come.”

She had another operation in Northampton in 2012 and said: “Still nothing was mentioned.

“Obviously, I was in a same sex relationship so I don’t know if he wrongly assumed it wasn’t part of our plan [to have children].

“It’s difficult to say if it’s because they wrongly assumed I wouldn’t have a child or was it because they didn’t think it was that severe, but now I wish someone could have said you’re going to get an X amount of time [to conceive].”

Carla said she was first made aware of her fertility issues years later.

“It wasn’t until 2016 when I had an operation in Kettering. I used to work in healthcare and the consultant was a colleague. She said afterwards that had I had children already, she would have transferred the operation to a full hysterectomy.”

The operation had discovered that Carla had polycystic ovary syndrome (PCOS), which can also cause fertility issues.

The consultant told Carla she probably had a year until she would start to get symptomatic again and should try and get pregnant as soon as possible.

Carla and Debi have had four attempts of artificial insemination and six attempts at intrauterine insemination (IUI), where sperm is inserted directly in the uterus.

They travelled to Denmark for IUI because it is cheaper there than in the UK but travelling and treatment has still been expensive and so far unsuccessful.

Carla is starting to get symptomatic again so a round of IVF might be their last chance.

“That has been difficult to come to terms with,” said Carla.

In previous rounds of treatment, Carla said she’s dared to believe she might be pregnant and said: “The cruel games your body plays on you, feeling like you are pregnant, thinking every ache or pain could be implantation pain or symptoms of pregnancy [is] gruelling and soon takes its toll.”

She said: “Time is running out but so have our funds.

“We have used up all our savings and now have set up a crowdfunding site to hope we can gain a little support to help us on our way.

“IVF is the only thing we’ve not tried, and with a hysterectomy looming I want to know that we tried everything before I lose the capability to even conceive.”

The couple are unable to prove their infertility according to the NHS guidelines that govern who qualifies for IVF, so their only option is to go private.

Carla said their dream is to have their own child and is not sure adoption or other routes are for them.

“I have plenty of friends who have and [adoption] worked for them but it’s personal preference.

“It’s not really for us, we wanted to try everything possible to have our own biological children.”

The couple’s fundraising page can be found here.