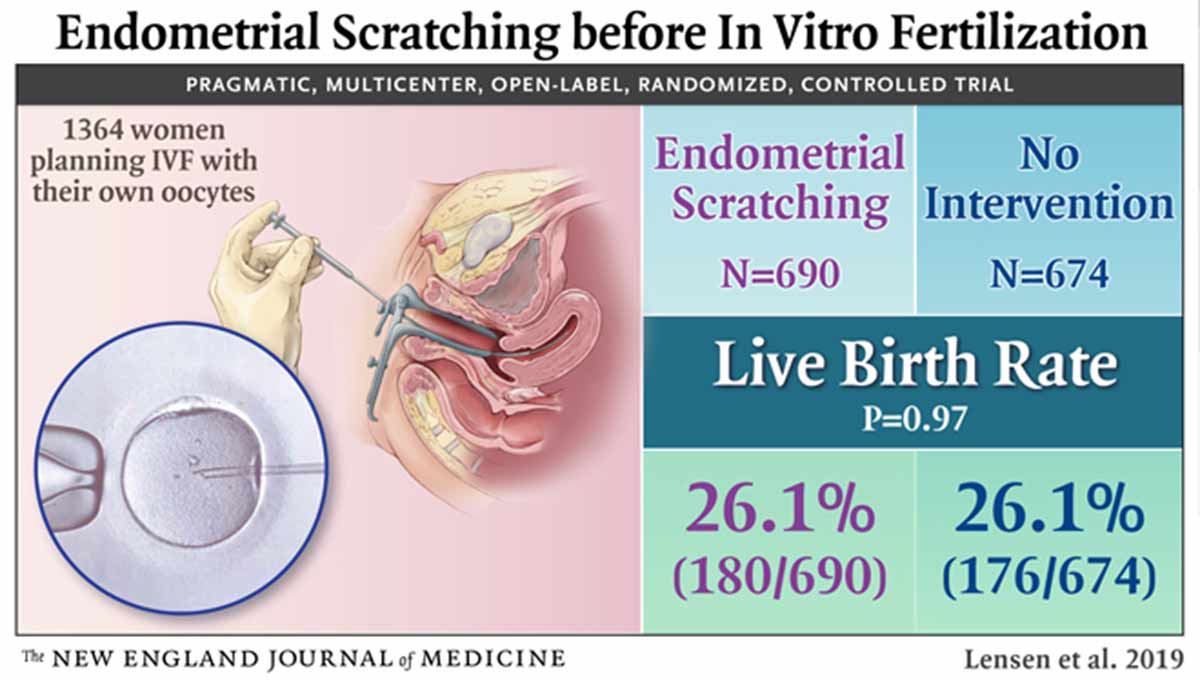 In a randomized, unblinded trial Endometrial scratch did not improve first-time success with in vitro fertilization (IVF) or intracytoplasmic sperm injection (ICSI).

Patients who received endometrial scratching – in which the uterine lining is wounded slightly to facilitate embryo implantation — had live birth rates comparable to patients who received routine care (38.4% v.s 37.1%, respectively), reported Mostafa Metwally, MD, of the Sheffield Teaching Hospitals and the University of Sheffield in the U.K.

Although endometrial scratch has been previously questioned, these trial results provide conclusive evidence that the therapy does not benefit first-time IVF/ICSI patients, Metwally stated in a presentation at the European Society of Human Reproduction and Embryology virtual meeting.

Women in the endometrial scratch arm also had similar clinical pregnancy rates to those in the control group (42.6% vs 40.6%, respectively), investigators found.

“Our study is the largest and most conclusive study in women having first time IVF treatment,” Metwally said in a press release. “It is time to stop this practice.”

Richard Paulson, MD, director of USC Fertility in Los Angeles, said that while endometrial scratch has “some biological plausibility,” there are a number of problems associated with the practice.

“This happens to be one of the many problematic add-ons that we are seeing in the field of infertility that have been recently incorporated into practice,” Paulson, who was not involved in this research, told MedPage Today. He added that while many providers in the U.S. have abandoned this therapy, the results of this trial may have wider implications for other countries.

What is Endometrial Scratch?

Endometrial scratching, also known as endometrial injury, is a procedure undertaken to purposely disrupt the endometrium in women wanting to get pregnant.

“I think that this research should put an end to the endometrial scratch in the treatment of infertility,” Paulson said.

More than 83% of physicians in New Zealand, Australia, and Great Britain recommend endometrial scratch, according to a survey published in 2016. While the efficacy of the therapy has been challenged, some providers reportedly still recommend it to their IVF/ICSI patients.

In the present trial, Metwally and colleagues aimed to assess whether endometrial scratch in the mid-luteal phase improved chances of live birth in first-time IVF/ICSI patients. From 2016 to 2019, the group recruited women at 16 fertility centers in Britain. Inclusion criteria were age younger than 37 and expectation of good outcomes. Nearly 1,050 women were included in the trial; mean age was 33.

Differences in a live birth and clinical pregnancy rates among the endometrial scratch and control groups were not significant. All other secondary outcomes and adverse outcomes were similar between the two arms.

Metwally and colleagues acknowledged that the control group did not receive a sham procedure, but the group explained that the open-label design would not influence trial findings. In addition, the study may not be generalizable to populations with sociodemographic profiles different from the U.K.