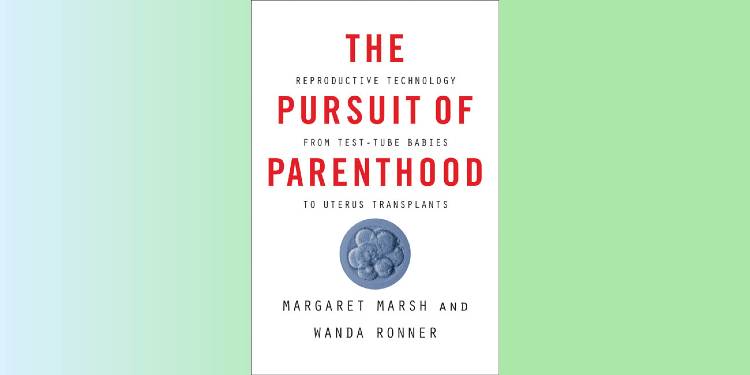 When Louise Brown, the world’s first in vitro fertilization (IVF) baby was born, many people found it shocking for women to have babies from embryos created in a laboratory, explains Margaret Marsh.

Since then, says the Rutgers University–Camden researcher, eight million IVF babies have been born around the world, and a couple having IVF with their own sperm and eggs barely raises an eyebrow today.

“However, other areas of reproductive technology do provoke debate – women getting pregnant in their 50s and 60s, compensated gestational surrogacy, and issues of access are just a few of them,” says Marsh, a University Professor of history and dean emerita of the Faculty of Arts and Sciences at Rutgers University–Camden.

Marsh and her sister Wanda Ronner, a professor of clinical obstetrics and gynaecology at the Perelman School of Medicine of the University of Pennsylvania, explore these thought-provoking issues and many more in their new book, The Pursuit of Parenthood: Reproductive Technology from Test-Tube Babies to Uterus Transplants (Johns Hopkins University Press).

The book delves into the controversial history of assisted reproductive technologies – procedures in which eggs and embryos are handled outside the body – up to the present day, from IVF to egg and embryo donation, gestational surrogacy, and the genetic modification of embryos.

Conversations with some of the pioneering physicians who developed these technologies are included in the book.

“We really get a sense of why these men and women became involved in IVF and how the technologies progressed,” says Marsh.

One chapter of The Pursuit of Parenthood considers the growth of IVF in Philadelphia as an example of how assisted reproduction developed nationwide. Ronner notes that the University of Pennsylvania’s in vitro fertilization program – the seventh in the nation and the sixth to have a live birth – was founded by Luigi Mastroianni Jr., a leading figure in the field and a protégé of John Rock, who was the first to report in vitro fertilization of a human egg in the 1940s.

“In many ways, Philadelphia’s story mirrors that of the path of in vitro fertilization more generally in the U.S. – beginning in academic medical centers, then developing in hospitals, and lastly to freestanding centers,” explains Ronner, noting that they were able to review fascinating materials from those early days that told the story of the early development of Penn’s program.

The United States was not in the forefront of the new technology, Marsh explains. After John Rock’s initial experiments, interest lagged until the late 1960s. And when it picked up, it was researchers in England and Australia who were taking the lead. The British team of Robert Edwards and Patrick Steptoe were the first to succeed with Louise Brown’s birth in 1978. Australia was close behind, becoming the second country to accomplish the feat, in 1980.

While the British and Australian scientists were moving ahead, says Marsh, American research in the 1970s was hampered by resistance from multiple groups, among them abortion opponents.

“Inevitably, some embryos created using IVF are discarded,” she says. “For those who believed that life begins at fertilization, destroying an embryo was like destroying a human life.”

In the tense political climate following the U.S. Supreme Court’s Roe v. Wade decision in 1973, which affirmed a woman’s right to an abortion, Marsh adds, the U.S. government imposed a temporary moratorium on funding IVF research until an ethics advisory board could be created to make recommendations on the use of the technology. But in 1979, when the ethics board voted unanimously to allow such funding, the government ignored them.

By then, American researchers who had grown tired of waiting were forging ahead with private money. In 1981, the U.S. became the third country to succeed in IVF.

“It’s a good thing they didn’t wait for the funding ban to end, because that ban still exists, with negative implications for both basic and clinical research,” says Marsh. “Research has not stopped, but if it involves human embryos it still relies on private funding.”

In terms of clinical treatment, notes the Rutgers–Camden researcher, the market determines what is acceptable or not – earning the United States a reputation as the “Wild West of reproductive medicine.”

“We are the only developed country that doesn’t have national policies or regulations governing assisted reproductive technologies,” Marsh says, noting that one issue with the lack of federal funding is that clinical practices can be put into place without the benefit of the kind of independent, peer- reviewed research made possible by such entities as the National Institutes of Health.

In light of this largely unregulated industry, Marsh and Ronner examine a series of ongoing – and often contentious – debates in the field, including the question “Does there come a time when a woman is too old to have a baby?”

A practicing gynecologist for more than 30 years, Ronner is concerned about the health risks for women in their 50s or older who become pregnant.

“There have been women who have had babies in their 60s, but is that something that should be medically allowed?” she asks.

The researchers also consider the use of compensated gestational surrogates – women who are paid to have a child on a stranger’s behalf.

“There are many wonderful parents who could not have children if they didn’t have a gestational surrogate,” says Marsh. “For instance, there are women who are unable for medical reasons to undergo a pregnancy and gay male couples who would otherwise be unable to have children with a biological relationship to at least one of the parents.”

However, Marsh continues, there is also an inherent risk in compensated surrogacy.

“It’s difficult not to see this as potentially exploitative of the surrogate,” says the Rutgers–Camden researcher, noting that two countries, India and Thailand, used to allow the practice, but India now significantly restricts it and Thailand has outlawed it entirely.

Another critical question involves the responsibility for paying for IVF treatments.

Ronner and Marsh believe that health care is a human right and that fertility care is part of health care, adding that women of color and those of modest means can have difficulty accessing the procedures. They argue that IVF, within reasonable limits, should be covered by health insurance. New Jersey, she notes, is one of only seven states that do mandate health coverage for IVF.

“In states that the procedure is covered, it does not seem to add too much to overall health-care costs,” Marsh adds.

Whatever the debates at hand, says Marsh, they believe that the time is overdue for the United States to come together as a nation to make policies on the future of assisted reproductive technologies.

“We think that it’s important to have this national conversation and come to a national consensus on these issues, rather than just letting the market rule,” says Marsh.

The Pursuit of Parenthood is the final volume in what the sisters call their “infertility trilogy.” The Empty Cradle: Infertility in America from Colonial Times to the Present was their first, followed by The Fertility Doctor: John Rock and the Reproductive Revolution, which explores the life and work of the doctor most famous as the co-developer of the oral contraceptive.

Editorial Team
Fertility Road aims to inform and inspire in a way that is direct, honest and empathetic, whilst breaking down the science by being written by top experts from the fertility field.
PrevFertility Clinics – the good, the bad and the ugly
Our Lullaby – Camille Nelson feat. Madilyn PaigeNext