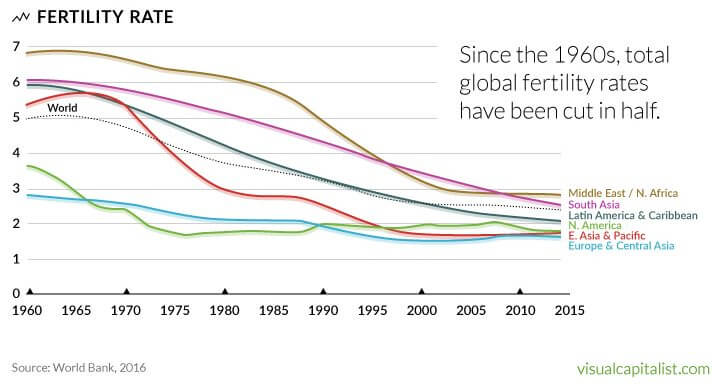 The US fertility rate has plummeted to a record-low, new CDC data reveal.

The new report, a first-look at national birth records for 2018, shows last year saw the fewest number of births since 1987, with a little more than 3.7 million babies born, down 2 percent from 2017.

The total fertility rate (i.e. how many babies the average female is expected to have based on trends) also hit a record low.

The fact that the rate keeps falling, Livingstone says, seems to reflect a general, enduring trend of men and women delaying parenthood until later, rather than a reaction to hard times.

‘It started going down with the onset of the recession and experts had expected it to rebound but that hasn’t happened,’ Livingstone said.

‘It makes one wonder: is this the new normal?’

The overall number of births hit a peak in 2007 before steadily declining, slightly increasing again in 2014, then continuing its downward spiral.

The new report marks the fourth year in a row since that slight uptick.
Birth rates for teenagers aged 15 to 19 years old dropped 7 percent – part of an ongoing trend for 12 years.

The rate also dipped, yet again, for women in their 20s, dropping 4 percent to a record low. Though it was a smaller decline, it was in many ways more significant, since 20-somethings account for the bulk of births.

The drop was bigger for women in their early 20s (5 percent) than in their late 20s (3 percent), reflecting the general delay of parenthood.

However, that push-back is not completely linear.

Last year, data showed drops in all ages groups under 40, but this new report shows a slight increase in the provisional birth rate for women aged 35–39, up 1 percent from 2017. The number of births to women in their late 30s increased by 2 percent from 2017 to 2018.

Editorial Team
Fertility Road aims to inform and inspire in a manner which is honest, direct and empathetic. Our worldwide expert writers break down the science and deliver relevant, up-to-date insights into everything related to IVF.
PrevThe Heat Is On… It’s Time To Keep Your Cool
Dutch Fertility Doctor ‘Secretly Fathered At Least 49 Children’Next