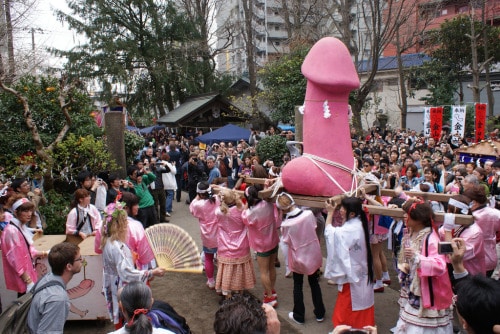 Of course, there could be various factors that have played a part in these stats – e.g. women having more of a career focus before having children, or couples waiting longer before starting a family.

However, for some, the issue of fertility can be a sensitive subject. According to the NHS, while 84 per cent of couples will conceive naturally within a year if they have regular unprotected sex, one in seven couples may struggle to conceive. While some may go down the IVF route, others may choose to have surgical procedures to help treat infertility. There are also various supplements available for both partners to take to help boost their fertility levels e.g. Coenzyme Q10 is said to boost fertility by improving sperm quality. But, while these are all ways couples can try to increase their chances of conceiving, there are also plenty of bizarre fertility rituals evident across the world. Here, health supplements stockist Pharma Nord, we take a look:

Wills are put in place to leave objects and possessions of those who have died with those still living. However, Cantonese funeral traditions seem to have taken it one step further. Often, the daughters-in-law of the deceased will cover their stomachs with green cloths — this colour as associated with spring, growth and fertility. They will then rub their bodies against the coffin in a bid to gain the procreative power of the recently deceased person.

At the Hagia Sophia Museum in Istanbul lies the Wishing Column. The museum, which has previously been a church and then a mosque, sees people come from far and wide to see the column which is said to weep holy water. It’s often referred to as being the tears of the Virgin Mary. Women will stick their thumb into the hole and rotate it as far as they can in the hope of boosting their fertility levels. They believe that this is their way of being blessed by this sacred water.

We’ve all heard of certain drinks and foods acting as aphrodisiacs. The likes of oysters, asparagus, and pomegranate are all said to have seductive connotations, while some restaurants and bars have concocted what they believe to be sensual cocktails. However, locals in Zimbabwe have taken it to a whole new level. It’s believed that baboon urine carries hormones that can boost male and female fertility. People are known to mix baboon urine with beer in a bid to aid their likelihood of becoming parents. Unsurprisingly, medical professionals in Africa advise against this ritual.

In some quirky bars, underwear is found hanging from the ceiling. Bars, such as Muriels in Belfast, Northern Ireland, are well known for having ladies’ garments on show. While this is for décor, this isn’t the case in the Congo. It’s customary for the nation’s Yansi people to throw their underwear onto their roof when it’s a waning moon. This is meant to help boost fertility and the rate of conception.

In the Italian city of Naples, you’ll find what is hailed as a ‘miracle chair’. Believed to have been owned by Saint Maria Francesco of the Five Wounds of Jesus, this chair sees thousands of women queue up to sit in it and be blessed with increased fertility levels. There’s obviously no scientific proof that this will work, but around the chair are thousands of pictures of babies born to ladies shortly after they took part in this ritual.

The annual Easter tradition in Holloko, Hungary, sees men in costumes douse females in buckets of water. This ritual dates back to as early as the 2nd century and is believed to be a way to cleanse women in order to give them the gift of fertility. Women who want to participate line the streets in traditional clothing and wait for males to throw water over them.

Of course, Britain has some quirky rituals to add in too and this list wouldn’t be complete without a special mention to Cornwall’s ‘Crick Stone’. Its legend dates back over 4,500 years and it’s said that if a woman passes through it seven times, they’ll fall pregnant shortly after.

Of course, medical care and tried and tested methods could (and probably should) be your first port of call. However, some of the above have long been rituals in their own country and people still continue to participate in such events across the globe.

What is a pagan fertility ritual?

Fertility rites are religious rituals that are intended to stimulate reproduction in humans or in the natural world.

Editorial Team
Fertility Road aims to inform and inspire in a way that is direct, honest and empathetic, whilst breaking down the science by being written by top experts from the fertility field.
PrevFertility Road announces exclusive global partnership with AI company Life Whisperer
The future of male fertilityNext