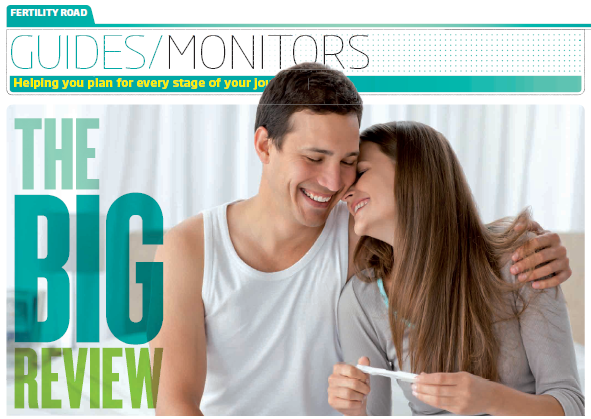 Fertility monitors can be reassuring and empowering – putting you in control of your fertility. But with so many to choose from at very different prices, the choice can appear bewildering. Which is right for you?

If you have been trying for a baby for a short time, and have regular cycles you’re best advised not to spend too much money now and let nature take its course. Concentrate on understanding your fertility cycle by keeping a diary and observing fertility clues (changes in your body). You might find fertility ‘Apps’ a useful low-cost option. If you are over 35, or have irregular cycles, you may not want to leave things to nature. Try ovulation tests such as ClearBlue, or First Response (£10-15). They’re simple to use and can estimate ovulation dates. If you have not managed to conceive after 4 cycles using these tests, we suggest moving up to the next level.

Beginning to get worried (6-12 months)

If you’ve been trying for 6 months, you have a 50% chance of being diagnosed as infertile after a year. So it makes sense to start taking a closer look at what help is available. If you have not yet tried LH tests, you could try using them for a couple of months. Many couples will want to start monitoring things in greater details as this may help the diagnosis of a problem preventing conception In that case, Fertility Road would recommend the Clear Blue Fertility Monitor or DuoFertility Monitor. The ClearBlue monitor is a standalone monitor whereas the DuoFertility comes with expert support.

In your second year, you should visit your GP to get a few tests and try to identify the cause of the delay in getting pregnant. During this year, you may not get fertility treatment if no major problems are found. The ClearBlue Fertility monitor and the DuoFertility monitor would be an investment worth making at this stage.

More details about each of the monitors: Fertility monitors fall into four main categories:

Ovulation Tests such as Clearblue and First Response rely on measuring the surge in luteinising hormone (LH) that occurs just prior to ovulation. Plus points include clarity and simplicity. A simple yes/no answer for identifying your two most fertile days is given by dipping the test stick in urine and waiting a few minutes for the answer. On the negative side, they can be somewhat messy to use and their accuracy may be questionable if you have been trying for a baby for over 6 months. If you are one of 20% of women with hormone irregularities, then they cannot be expected to work. Finally, they do not confirm ovulation. So even if you get a positive response, you do not know if or when you ovulated.

Further up the price scale, the Clearblue Fertility Monitor work in a similar manner as the single-use tests, however, the monitor will learn about your cycle and prompt you on the best day to test. As this monitor relies on reading hormones in urine, it suffers from the same failings as ovulation test strips. Importantly, it doesn’t confirm that ovulation occurs.

Many GPs recommend that couples try to establish their fertile days by monitoring the rise in body temperature as ovulation approaches. Options range from simple thermometers costing under £20 through to a range of computerised temperature monitors such as Cyclotest and Babycomp costing up to £400. As changes in temperature can be minute, a digital thermometer which can read up to 0.01 degree may give more accurate information than relying on the human eye. If temperatures are taken at the same time every day on waking, then an accurate record of your fertility cycle and indication of ovulation can be charted. However, it can be difficult taking temperatures at the same time every day – ideally around 6-7am. Any movement on waking will contribute to a rising body temperature – as will any illness or disrupted sleep. Some fertility monitors such as Cyclotest allow you to add in additional clues such as cervical mucus and LH surges to possibly enhance the results.

Prior to ovulation, a woman’s saliva seen close up may begin to form a distinct fern-like pattern indicative of the fertile days. However, most clinicians doubt the accuracy of using saliva analysis to identify fertile days. The level of clinical evidence to support the efficacy of this technique is far from convincing.

Simple microscopes allow you to look for ferning. Digital monitors such as OvaCue monitor electrolytes in saliva.

DuoFertility starting at £149 for the monthly plan is expensive and you may wish to try cheaper options during your first year of trying for a baby. But you may feel DuoFertility justifies the expense. Firstly, DuoFertility is fully automated – all you have to do is wear a lightweight sensor under your arm while you sleep. DuoFertility gives a week’s notice of peak fertility and confirms when ovulation has occurred. You also enjoy individual support from fertility consultants.

New clinical evidence has clearly shown that for infertile (but not sterile) couples DuoFertility can be more effective than a cycle of IVF when used for 12 months.

On balance, we believe that ClearBlue and First Response ovulation tests are the first choices early on due to their simplicity and relatively low cost. From six months onwards the accuracy of these tests has to be questioned. After 6 months of trying DuoFertility offers the most in-depth support.

The combination of simplicity in use, expert support, compelling clinical evidence and a ‘get pregnant or your money back guarantees’ add up to an impressive package.

Change the Criteria of IVF and Stop the Postcode Lottery

Change the Criteria of IVF and Stop the Postcode Lottery