The Sound of Silence : Investigating The Emotional Pain of Multiple Miscarriages

Say the word ‘miscarriage’ to a crowded room and you will hear a penny drop. It’s a reality that Tamsin Oxford explores as she investigates the emotional pain of multiple miscarriages.

My name is Lucy and I’ve had eight miscarriages since I started trying for a baby in 2007. Sometimes I can’t remember why I’m putting myself through this or even who I used to be.

Every time I fall pregnant I wonder, ‘is this also going to end? Can I really go through this again?’”

Miscarriage is a place that only those who have felt such a loss can see, where your heart mourns for a life that could have been and around it sits an invisible wall that makes you feel as if everybody else is on the other side.

You can leap right out and say that you’ve just had root canal or a stomach ulcer, but saying you’ve experienced a recent miscarriage leaves a room silent, awkward and grasping at conversational straws.

“Our last miscarriage was just after Christmas and we bumped into a friend in the street who asked us how our Christmas had been,” says Annabelle Danton. “We both lied and said it had been fine, because if we’d actually said what had really happened, they wouldn’t have known how to cope with it and inadvertently made us feel bad for being so honest.”

Annabelle’s been trying for a baby since 2009 and experienced more than five miscarriages; her journey has been difficult to say the least. Multiple miscarriages produce scars that grow increasingly difficult to heal with each loss, and leave many feeling incredibly lonely. Almost every woman who stepped forward with their multiple miscarriage stories felt that they couldn’t talk about the pain they were going through, or open up about how scared they were about their chances of having another baby.

“Trying again was so difficult. All I could think about was that I wanted to be pregnant and how unfair it was that I wasn’t, yet as soon as I did get pregnant again I was petrified it would be taken away from me,” says Cathryn Scott. “That feeling has remained with me through all my pregnancies.”

Melissa MacKenzie agrees, “I remained completely paranoid throughout my eventual successful pregnancy. I thought that once I got to certain milestones I would relax, but I never did.” Some were as wounded by the physical act of miscarriage as they were by not knowing how to deal with how they felt, and the often callous attitudes of the medical professionals they met afterwards.

“I remember the first miscarriage so clearly and the worst part was that I had no idea what to expect; I didn’t know that foetus would fall into my hand with that last cramp and that I would literally fall onto my knees with the grief and horror,” says Lucy. “Then, when I went to the hospital for a check-up scan the next day I was expected to walk through rooms of newborn babies and pregnant mothers as if my ordeal was nothing more than a biological accident.”

Loneliness, isolation, grief, shame – these are the emotions tacked onto the end of a miscarriage as if the experience itself wasn’t quite enough. What can people do to overcome these in a way that is healthy and allows them to pick themselves up and carry on trying for a baby?

Susie Gower, the Becoming a Mama coach and founder (becomingmama.com), says, “It is important to acknowledge that this is a loss, a loss of not being pregnant, not having a bump and not having a baby like your friends. It is hugely important for you to talk and share how you feel, firstly to your partner and then possibly to family and friends.”

It is very easy as well to forget the partner in the miscarriage equation. Many feel as if they are left behind and don’t know what part they must play or how to react. Some, like Greg Marthwell, felt that it was incredibly selfish to be upset when his wife was going through a very physical and emotional ordeal.

“I pushed everything I felt to one side because I had this belief that it all about my wife, and that it was my job to be tough and strong,” says Greg. “Finally, months later, I cracked and told her how much it had affected me. I wish I had done it sooner. Instead of her seeing me as selfish and demanding, she felt less like she was doing it alone.”

Melissa adds, “My partner felt it very keenly; we were both equally upset when I had the miscarriage and I wasn’t afraid to share my feelings with him. I would definitely advocate talking about it with your partner. You might find your other half is trying to be strong for you but is glad of the opportunity to talk about his feelings of loss too.”

Sarah Bateup is an accredited cognitive behaviour specialist and clinical lead of PsychologyOnline, and believes that talking about the way you feel with people can really help.

“There are many reasons for feeling like you cannot or should not talk about a miscarriage,” she says. “Generally it’s normal to avoid talking about something that’s distressing – you might worry about getting tearful in front of people or seeming to lose control. Sometimes women are concerned that other people may not understand or will feel awkward or uncomfortable and should be encouraged to talk to other women or a healthcare professional.”

Initially there may be that all too familiar silence, but that is as much to do with your opening up about something that’s very painful as it is to do with friends and family not knowing how to react.

“I believe that unless someone has had a miscarriage they won’t be able to really get what you’re going through,” says Lucy.

“That said, when I staggered through my first conversation about it, even apologising for it, my friend was amazing. She didn’t get it and she said some things that we all know shouldn’t be said, but it was obvious that she was completely on my side.”

Melissa agrees, “I actually never minded telling people I’d had a miscarriage. I know it’s a shocking word for some, but the more I told people the more women said to me ‘Oh no, I had one too!’

It might seem taboo, but it is one of those things that nobody talks about for whatever reason and, if you do, you’ll find many women who have been there as well and are happy to share their experiences and listen to yours.”

No matter how often or how badly a woman has miscarried she has something in common with others who have been through it, and it is in this grief that there is solace. What have other women done to cope; what are their mechanisms for getting through the day?

“For me it is about finding a way to live with the sorrow, accepting that it is part of my story,” says Annabelle.

“That doesn’t mean I don’t live life and it doesn’t mean I no longer have dreams, it’s just saying that my experiences are what make me who I am today. Immediately after a miscarriage, when I’m feeling at my most raw and vulnerable, I have learned that I need to give myself enough space to grieve.

You have to find a way to put one foot in front of the other – don’t expect anything else from yourself and don’t let others tell you when you should start feeling better. As an introvert I draw strength from the quietness around me, so in the early days I avoid social contact.”

She also suggests that women experiencing a miscarriage should focus on doing things that ground them like cooking bacon butties or gardening or going for a run.

“I want myself back, the woman I was before all the miscarriages started, so I’ve made a Living Bucket List of all the things I love doing that I’ve not been able to do over the past few years because I was trying for a baby or recovering from a miscarriage,” she adds.

“At the centre of this is my husband. Recurring miscarriage really tests a relationship and we’ve learned to keep talking to each other.”

Ingrid Lotze experienced three miscarriages on the way to having her first child and she adopted a very philosophical approach; “The trick is to be in the moment; stay in the moment all the time and try not to dwell on what could have been, what should have been and what must be. Focus on getting well, focus on getting on with your life, focus on making another baby.

“Having a miscarriage is traumatic and sad,” she adds. “The experience is filled with horror, disappointment and ‘no!’ Every fibre of a woman’s being says ‘no’. Finding the ‘yes’ is how you heal and everyone’s ‘yes’ is different.”

Melissa thinks that it is vital to be honest and to not subvert your feelings, although she did find it helped to research the issue and discover more about the causes of miscarriage, as it reassured her that it wasn’t anything she had done.

Cathryn adds, “When people ask how you are feeling, the phrase ‘I’m bearing up okay’ really helps. Some people expect you to be alright a couple of weeks later, which was definitely not the case for me. Bearing up acknowledges that you are still struggling without having to go into great detail about how you are actually feeling.”

For many women the journey to having a baby, whether it’s their first or their last, can be peppered with the losses of unborn children, and it can be hard to pick yourself up and get back onto the baby making train. Susie Gower recommends a 30-second coping strategy that she devised for women to help them heal.

“With closed eyes, imagine you are holding a beautiful piece of ribbon attached to a large balloon. It can be any colour and size. Place inside this balloon your immediate worries such as ‘the train is late’, ‘I’m ovulating tomorrow’, ‘I hope this will work’, and then release the ribbon.

Watch the wind sweep the balloon into the sky until it looks like a tiny full stop in the distance and keep looking until it has gone, along with the emotions you placed inside it.”

Remember, people may not always say the right things or give the right support, but they usually do hold your situation in their hearts.

“My parents told me a couple of months after my miscarriage that they had lit a candle that night in memory of what would have been their grandchild,” concludes Cathryn. “I was so touched by that. I thought it was beautiful.”

Seek the advice of women who’ve been through it ahead of you and use what you need to get through the days ahead. It isn’t easy, but you need never feel alone.

In this article:Fertility & IVF, Mental Health 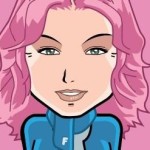 Words are my favourite things. I eat them for breakfast, I make them work for my tea.