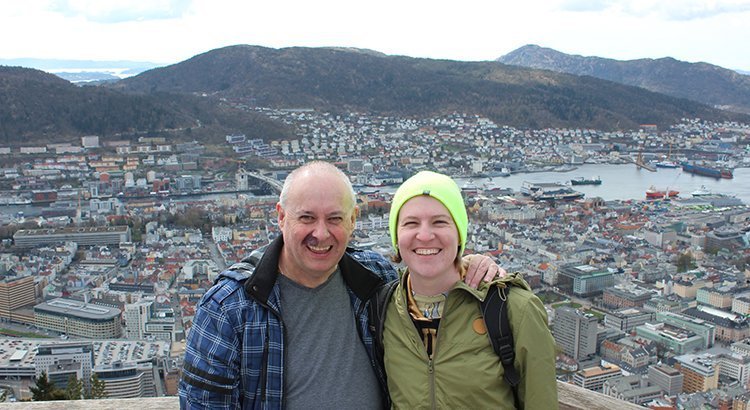 Mike and Sarah Leigh-Bergin might be separated in age by 26 years, but share a passion to start a family. Here, Sarah tells Fertility Road readers about the couple’s memorable journey so far with Norwegian IVF experts Klinikk Hausken.

Like many couples looking for help to start a family, we began researching the different options available to us and immediately found it all a little overwhelming.

There were so many options, so many fertility clinics, yet all of them apparently confidently offering us the chance to become parents. What was the right answer? Did we need all these extra treatments? Is treatment abroad safe? What would it all cost? The questions and possibilities seemed endless.

Prior to getting married in 2011, we were aware that a natural pregnancy was not possible due to Mike having had a vasectomy many years ago before we met one another. We sought advice from our GP who explained a reversal was unlikely to be successful given the length of time since the vasectomy and scarring on the tubes.

We approached the NHS for funded IVF treatment but were turned down due to Mike’s vasectomy being deemed a lifestyle choice. We attempted to appeal this decision based on the fact Mike made it due to having three great stepchildren and his ex-partner’s difficulties with contraceptive options.

This appeal was unsuccessful, which was disappointing, but we accepted that the NHS has limited funds and cannot support everyone.

Mike and I began researching different IVF clinics around the UK and in Europe – there were just so many to choose from, but we thought we knew exactly what we needed… the only problem was his vasectomy, so the rest should be straightforward, right? Even so, with so many treatment options I decided to check out the Fertility Show in London. Mike was working that weekend so I went with my mum.

After meeting a number of clinics I found that the treatment plan for each was very similar, so it was then a case of deciding which clinic I felt most comfortable with, and which offered the treatment and support we wanted and was reasonably priced. I listened to a talk by Dr Jon Hausken from Klinikk Hausken regarding treatment abroad.

I hadn’t visited this stand yet but soon realised this was a clinic we should chat to in more depth. Upon doing so we quickly realised these were specialists who would offer us the treatment we needed in a country with strict protocols regarding health treatment, and who had a really keen focus on professionalism, knowledge and passion for IVF treatment. This all shone through.

Chatting to Dr Hausken and Camilla (Customer and Admin Manager), we were offered guidance not only on the treatment offered but also the differences between their clinic and the many others out there.

Although cost is not everything it has to be a factor in the decision, and we could see that with Klinikk Hausken we would be able to afford more attempts, as well as an increased number of treatment processes such as the embryo scope (time lapsing was included in the cost). I felt comfortable chatting to the clinic – I didn’t feel like they were trying to sell me a service in the same way as some of the others, and I left reassured that the costs appeared clear unlike some clinics which seemed to add on different elements as the conversation developed.

After the show, Mike and I spent time looking through the information I had brought home.

We reconsidered all – the UK and abroad – and narrowed the options down to a handful, but in our hearts, we felt Norway was the place for us.

Klinikk Hausken suggested we kick-started our official interest with a free Skype consultation. Wow, I have never been so nervous waiting for a call. Did the house look okay? What did we need to wear? Alright then, reality check, this was not the focus! After a few laps around the lounge, with Mike repeatedly telling me to sit down, Dr Hausken called on time, as promised. We talked through the options and best treatment plans – the Skype consultation took all our worries away and we agreed to start treatment the following month.

This was great – we were keen to start sooner rather than later due to our age gap, and not wanting Mike to be too old if we were lucky enough to have a family. Following this consultation, we had another Skype consultation with nurse Elise who talked us through the pre-treatment plan.

Five weeks later we flew out to Norway. We chose to spend 10 days out there rather than the seven needed as we were keen to make this a holiday as well as a trip for IVF treatment.

At the initial scan, we found I had reacted to the pre-treatment more than expected and appeared overstimulated.

The egg collection went well and the clinic told us, for reassurance, they “had found a sperm”, which we still find funny to this day. After the clinic working its magic we had plenty of fertilised eggs which eventually whittled down to become three grade A embryos. You try to remind yourself not to get too carried away but it’s hard – already things were far better than we could ever have hoped.

Shortly after the embryo transfer I began feeling quite unwell but assumed this was normal, but the clinic who were monitoring me confirmed I was experiencing quite severe Ovarian Hyperstimulation Syndrome (OHSS) and they provided further treatment to make this better.

After the two week wait and many chats about potentially being pregnant, we found out that this attempt had been unsuccessful.

Although we had tried to remain pragmatic it still felt heartbreaking that this attempt had not worked. Although it was just a tiny embryo, you still feel a little like you lost this little life. However, we had so much to be positive about – through the clinic’s expertise we now knew we were able to find eggs and sperm and that embryos would be possible.

And better still we had two embryos left that had been frozen.

A few months later we headed back to Norway for a frozen transfer – it felt like going home. Seeing the staff again was lovely; they were always so welcoming and caring. Due to having a frozen transfer we had plenty of time to enjoy

Norway and to see the stunning scenery, which is literally breathtaking. We visited a number of the local towns including Bergen and Stavanger; we also took in Langfoss, an amazing waterfall. Shortly after we visited Langfoss the scenery changed from sunshine and waterfalls to a land covered in snow. The combination of the treatment going well and the scenery made for a perfect holiday and we came back from Norway relaxed and chilled… not the words I often hear when talking to people about IVF treatment.

Again after the two–week wait we had another negative result. It was tough but the reality wasn’t as hard to take as on the first occasion.

We had another Skype consultation with Dr Hausken who had identified a few problems I have. It had been confirmed I do have PCOS, am prone to OHSS, like to hoard my eggs and don’t ovulate each month. I also appear to be a little insulin-resistant. Dr Hausken explained that with this knowledge now in place a different treatment plan would be better, and I started that ready for our third trip to Norway in September 2015.

Things looked better this time – the egg collection and sperm extraction went well and again we had three embryos; one was chosen to transfer and the other two frozen.

I should say, despite the first two setbacks we never considered approaching another clinic as we were both so impressed with Klinikk Hausken’s person-centred approach; we felt safe and valued with them.

After the treatment, we were given the pregnancy test date, September 22, 2015. This day was really significant to Mike and me as it was exactly a year ago that his mum Carmel had passed away. Was this a good sign? We thought so.

We decided not to test early as the date was too important, so when the day came it was either going to be an even harder day or a real circle of a life moment. Thankfully we had a positive pregnancy result (the first test we were unsure as to whether the line was really there, so did a second one. This one clearly stated pregnant – woohoo!).

On October 15, we had our seven-week scan. For us, this was the moment to really confirm everything was okay. It was magical hearing that our embryo (kindly named KP – Kevin Pickle, by a friend) was in the right place and then seeing it’s very tiny heart beating was so special. We now have a very precious picture of our little seven-week embryo, which is giving us excitement and joy even before he or she is born.

There have been some ups and downs through the journey, but looking back over the last year since the show we realise how special each moment has been, and can honestly say we wouldn’t have changed a thing.

Had the NHS not declined our request we would never have met such amazing staff at Klinikk Hausken and would not have had these trips to Norway which has become a second home. Nor would we have met other patients who will hopefully remain lifelong friends.

Is it the last trip to Norway? Not a chance – without a doubt, Norway will always be important to us and will hopefully be the place that we take KP back to in future.