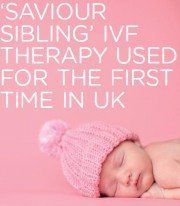 A nine-year-old girl from the UK, born with a rare form of anaemia known as ‘Fancomi’, has been saved from the life-threatening disease through the use of IVF.

The girl was born with Fancomi anaemia, after inheriting it from her parents who were unknown carriers of the faulty gene. She developed bone marrow failure as a result. A worldwide search was unsuccessful in trying to find her a suitable bone barrow donor and tests on her older brother proved that he was unsuitable.

The family, who wish to remain anonymous, discovered that embryos could be screened to find a potential suitable donor match for the girl. Doctors at the Care Clinic in Nottingham did exactly that and after overcoming selected legal hurdles, the couple were able to proceed with the birth of a so-called ‘saviour sibling’.

Upon the birth of their new baby boy, doctors stored umbilical cord blood – which contains stem cells and recently collected bone marrow – from him to give to his sister. The girl is recovering in hospital at Addenbrooks in Cambridge and is expected to be back at school in the near future.

This case is a first in the UK. In 2003, Michelle and Jayson Whitaker from Derbyshire travelled to the United States to carry out the same practice as British law prevented it at the time. They needed a ‘saviour sibling’ to prevent the death of their son, who also had a dangerous form of anaemia.

Simon Fishel, Managing Director of the Care Fertility Clinic, told The Guardian: “We are delighted at this outcome for this family. This is absolutely a positive life-giving medicine… Many specialists do not know that this procedure is available in Britain – patients are told to have more children and that with luck one might be a suitable donor, or they are told they have to go abroad.”

The clinical procedure cost £10,000, which was paid for by the couple’s local primary care trust.