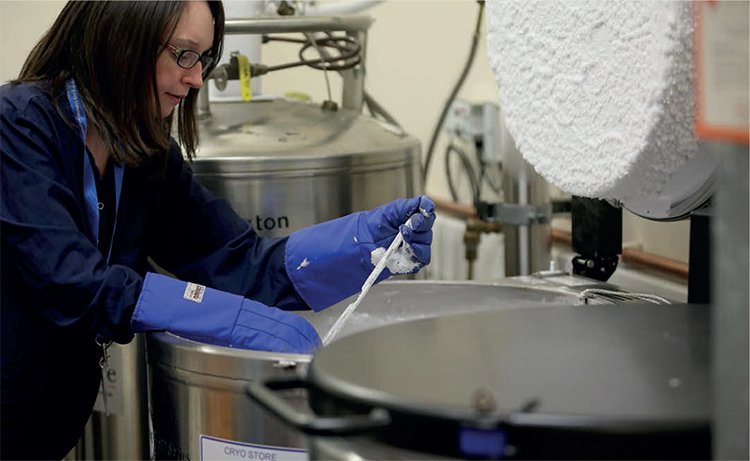 Fertility Road go behind the scenes with UK’s National Sperm Bank Situated at Birmingham Women’s Hospital the team spent a day with the staff, looking into how this major operation does its job.

7am – The first member of staff arrives for work at the National Sperm Bank. The sperm bank is open 24 hours a day, but Maureen, the outreach and admin assistant, is the first of the team to start work in the morning. Maureen checks the emails for any new enquiries from men who are interested in donating or finding out more about what is involved in being a donor, and for any test results or doctors’ letters that may have been sent in for newly accepted donors.

7.45am – Rachel Jennings, the National Sperm Bank’s healthcare science practitioner arrives. She checks in with Maureen, who updates her on emails. Rachel gets changed into her ‘blues’ (the blue top and trousers that she wears when she is working) and prints a clinic list so the receptionists know who is expected later that day.

8.00am – The first sperm donor who is booked for screening is due to arrive. Most donors or potential donors are employed and want to book their appointments so that they can attend on their way to or from work. This is not like a standard hospital appointment which you would fit in around your work; the donors are helping the National Sperm Bank so the staff aim to be flexible and to fit appointments around the donors’ availability as far as they can.

The purpose of the screening appointment is to explain the process to the potential donor, to go through the necessary consent forms and to take a family history. Rachel needs to find out whether there are any health conditions in the family that could disqualify the donor before they can make a decision about whether they are suitable. This part of the appointment takes around 40 minutes, although Rachel says it can take longer if the donor is chatty! Then, she shows the donor to a private room where he is left to produce a sample which will be used for a ‘test freeze’ to see if the sperm is suitable.

If the sample is suitable, she will freeze it slowly by adding a special solution to prevent it being damaged when hanging it over the vapour rising from some liquid nitrogen.

10.00am – Rachel goes to check her emails, which may be from new donors saying which days they can attend for blood tests or counselling sessions. She books suitable appointments with the receptionist and replies to as many emails as she can, as she has to keep going back to the sample which is freezing. She checks it after 10 minutes and then after another 15 minutes to ensure the temperature of the sample is gradually decreased.

11.00am – One of the regular donors is due. The donors arrive at a special entrance so they don’t mix with fertility patients having treatment at the clinic. Rachel meets the donor and takes him to the procurement room. When he has produced a sample he rings a bell so that she can collect the sample from him and give him his expenses payment. While he is in the room providing a sample, Rachel prepares special barcoded labels ready for freezing the sample and sends out email reminders to donors who have appointments the following day.

11.30am – Another new donor also arrives for his blood and urine test, and counselling session. He is sent off to produce his urine sample and Rachel escorts him to the main clinic where a nurse will take blood samples and ensure he gets to his appointment with the counsellor.

11.40am – Rachel goes to the lab to assess and freeze the sample from the regular donor. She checks the sperm to see that it is moving and looks normal, and then she can start the freezing process.

12.00pm – Once Rachel has left the sample hanging over the liquid nitrogen vapours, she goes for lunch in the coffee room but takes a timer with her so that she can go back to decrease the temperature of the sample after 10 minutes and then again after 15 minutes.

1pm – An embryologist comes in to witness Rachel putting the donated sample in the liquid nitrogen tanks. Any time a sample is put into the tank, it has to be witnessed by another one of the embryology team. Rachel updates the database to include the freshly frozen sample and the log for the tank. All samples held at the clinic are recorded in this way. While she has been in the lab, Rachel has missed a couple of telephone calls. The other half of her job involves seeing oncology patients to store sperm samples before they undergo cancer treatments such as chemotherapy or radiotherapy, and a nurse has a patient who needs to be seen fairly urgently. Rachel returns the call and books in the patient for a couple of days’ time.

2pm – Another potential donor has an appointment for his screening test and while she waits for him to arrive, Rachel uses the time for some research. The potential donor who came in during the morning has a relative with a medical condition and it looks as if there might be a genetic element. Rachel emails the genetics department at the hospital outlining the family history and asking whether they can determine if there would be any risk to donor-conceived offspring. Their reply will help her to make a decision as to whether they can accept the donor or not.

2.15pm – The potential donor has still not arrived. Rachel calls him to see if he is on his way but there is no answer. She leaves a message, but she knows from experience that it is unlikely he will turn up. This happens quite frequently even when potential donors have confirmed that they will be attending after getting a reminder. Sometimes they change their minds at the last minute. Donating is a sensitive subject and it’s accepted that people may not inform the clinic of non-attendance.

2.30pm – Rachel carries out two test thaws on samples from potential donors. She has to check that a potential donor’s sperm is suitable for freezing by doing a test thaw because all donor sperm is frozen. About 75% of sperm won’t meet the threshold and Rachel always warns donors that they are looking for samples that are way above average. She contacts donors by email to tell them the outcome of the test thaws, but reassures them that it wouldn’t mean they were not fertile if their sperm is not suitable for freezing.

The test thaw involves preparing the sample first to get rid of the protective liquid that was added during freezing, and then selecting the ‘best’ sperm. This is washed and Rachel counts the sperm and looks at how well they are moving about. If the sample is suitable, she will be able to accept the donor. In this case, one of the samples passes, but not the other.

3.45pm – Rachel emails the two potential donors whose samples she’s tested. She tells the first he is accepted, and asks him to let her know when he can come in for medical checks and a counselling session. The email to the other donor has to be carefully worded to ensure he doesn’t worry that he isn’t fertile because his sperm is not suitable for freezing. Rachel will have prepared the donors during their very first screening appointment to ensure they know how few people pass the test thaw.

She explains this isn’t a reflection of their natural fertility, but is just that some samples don’t freeze and thaw well.

4pm – Rachel sends out some appointment confirmations to the potential donors who have completed an initial questionnaire earlier in the week.

4.30pm – Rachel prepares her paperwork for the morning, making sure she has copies of the consent forms she will need for donors, as it is important that they clearly understand what they are agreeing to by donating sperm. Then she is finally ready to go home.

5pm – Rachel and Maureen may have left the National Sperm Bank for the day, but work still continues. Laura Witjens, the Sperm Bank’s chief executive, and the press officer Vicci Mace have a telephone conference to discuss the progress of their latest recruitment drive. They’ve had a campaign in the local media in Birmingham and the West Midlands to appeal for more donors and need to catch up. Several interviews have been booked in over the next few days for Laura to explain how important sperm donation is, and what a difference it can make to people’s lives. Laura has interviews for local and national media lined up, including two television appearances.

7pm – Laura Witjens leaves her home in the south-east to drive to Birmingham where she’s due to appear on a West Midlands news channel on the breakfast show first thing in the morning. She’ll be discussing the recruitment drive and the impact it has had on getting more potential donors to the bank.

9.30pm – Laura arrives at the hotel in Birmingham where she’ll be staying the night before the TV programme. She goes straight to bed so she’s ready for her early morning start and another busy day at the National Sperm Bank. 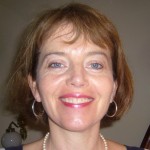