Stacey and Kurt contacted us (University Hospital Quironsalud Madrid) from the UK. They were deeply emotionally affected for a year after their previous unsuccessful IVF cycle in Birmingham in 2019.

Our first meeting was a Zoom video consultation of about an hour on Sept 20. She was a young 29y woman coming from a globally healthy family, affected by irritable bowel syndrome, and ex-smoker for 5 years. Her weight was slightly high (86 kg for 179 cm). Previously diagnosed with polycystic ovary syndrome as she had multiple ovarian follicles and delayed menstrual periods. Kurt has nothing of interest in the interview. Bodyweight was normal, but several sperm tests had shown severe damage in number and quality.

In 2019 they went under an IVF process. 12 eggs were obtained and microinjected but only three of them were fertilized. One embryo was transferred, and no other embryos could be vitrified. She felt very swollen and could hardly walk for some days. Finally, she didn´t get pregnant and decided to forget all about being under treatment again. 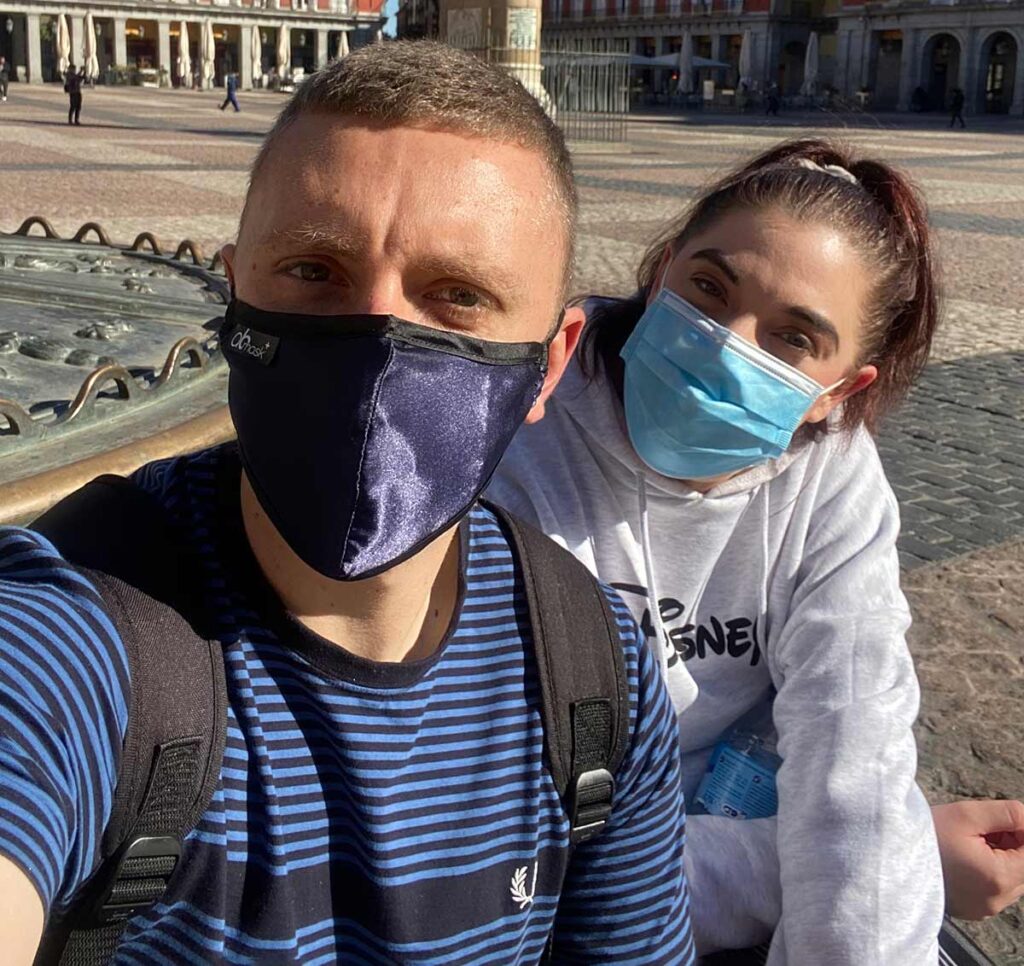 After the first video consultation, we arranged a two-night visit to Madrid. On their first day, we showed our Unit, did a profound analysis of their family and personal records, checked height and weight and analysed blood and semen samples.

Transvaginal ultrasound confirmed moderate follicular count and normal uterus and endometrium, and breasts had no anomalies. On their second day, we informed of the extreme sperm damage (none of them alive after 24h of incubation) and a high AMH 5,7 ng/mL.
We explained that high stimulation is needed when both gametes are affected, but high stimulation reduces embryo implantation and security is jeopardized.

We agreed to keep maximum security for her all the time, so we offered a two-stepped IVF cycle under the “Freeze All” technique. The first step was to stimulate safely and vitrify all embryos, transferring only one thawed embryo in a second step cycle.

The “Freeze All” technique offers maximum security for her all the time. The first step was to stimulate safely and vitrify all embryos, transferring only one thawed embryo in a second step cycle.

After explaining, reading, and signing Informed Consents, we agreed to use moderate doses of recombinant FSH (225 UI per day) and natural progesterone to block LH surge (transvaginal Utrogestan 200 per day). Both products were chosen because they are very easy to use, didn´t need to be kept refrigerated and might easily be transported back home with them to start medications before coming to Madrid, shortening the length and cost of their future trip.

They contacted us on Oct 23 as menstruation appeared. Flights were searched and we agreed to fly on Nov 1. As previously instructed, FSH 225 and Utrogestan 200 was daily administered 8 days from day 3.

On Nov 2 10:00 AM (day 11) ultrasound showed 12 nice follicles and the other six immature ones. Endometrium thickness was only 5mm as expected of the progesterone effect. Blood oestradiol was 3224 pg/mL indicating a moderately high response. Blood Progesterone was 12,94 indicating adequate administration and absorption and blood LH was 2,43 mUI/mL, indicating that LH surge had been adequately blocked.

On Nov 2 09:00 PM we administered subcutaneously a bolus of Decapeptyl® 0,2mg to provoke LH surge.

On Nov 4 at 08:00 AM we’ve performed an ultrasound-guided transvaginal oocyte retrieval under monitored sedation. She was unconscious for only 10 minutes and recovered in about 30 min. Simultaneously, a fresh semen sample was obtained.

At 10:00 AM after breakfast, an abdominal ultrasound showed no internal bleeding. The couple was happily informed that 15 oocytes were recovered.

The results before an embryo transfer

On Nov 4 at 13:00 PM we have informed that 14 eggs were microinjected, and they commented that Stacey had no pain.

The next day after the oocyte retrieval (Nov 5 09:00 AM) we have informed that only 9 of 14 were fertilized, as expected of the limited quality of both gametes.

Day 2 after retrieval (Nov 6 09:00 AM) we informed about embryo quality: two Grade A, three Grade B and four Grade C. Waiting until blastocyst was advised.

Day 6 after retrieval (Nov 10 13:00 PM) we informed that 6 blastocysts could be finally vitrified.

Once flights were reopened after lockdown for Covid19, provoked menstruation arrived on April 20. From next day she took oral oestradiol 3mg every 12h for 13 days until their second trip to Madrid.

On May 4, the ultrasound showed a nice 8mm trilaminar endometrium. As blood oestradiol (205 pg/mL) LH (8,58 mUI/mL) and progesterone (0,18 ng/mL) were all appropriate, transvaginal and oral progesterone was started (400 vaginally and 200 orally, both every 12h).

On May 9, one Day 5 blastocyst was thawed and transferred until ultrasound guidance. No rest was advised, and blood progesterone levels were appropriate (32 ng/mL). 5 more embryos are still vitrified.

14 days after embryo transfer urine test was positive, and an 8-week ultrasound confirmed a single normal baby was on board. Oestradiol and progesterone were stepped down gradually from eight week.

The treatment process was led by Dr. Antonio Gosálvez – Fertility Unit Director at University Hospital Quironsalud in Madrid who treated more than 10,000 patients during his career!