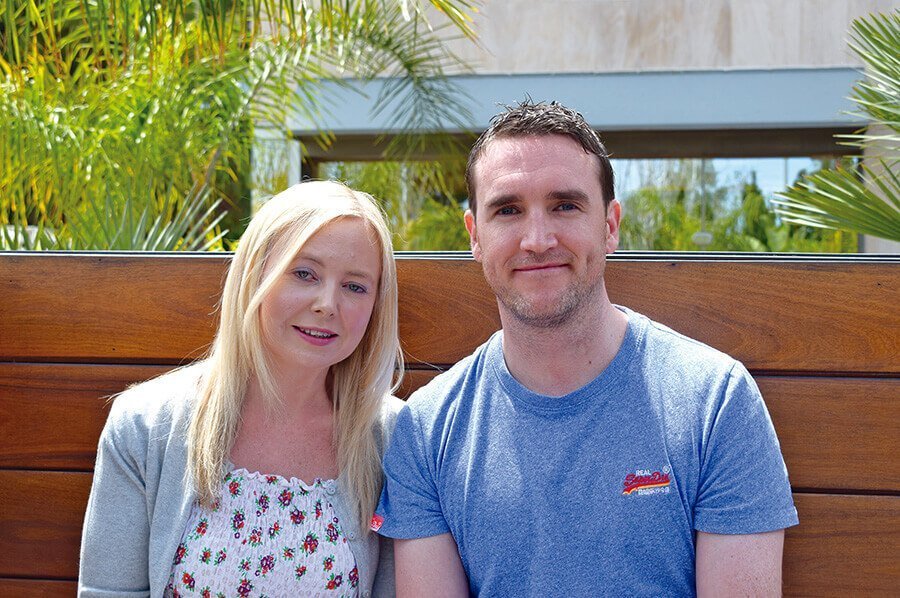 Kathryn and RichardA lot has happened since our last Fertility Journey post. Claire and David, winners of the Fertility Journey 2018, had their first medical consultation; the list of this year’s runner-ups will be posted soon; the recent birth of a beautiful baby and the upcoming birth of one of our previous winners.

After 7 years trying to form a family, and thanks to the Fertility Journey Project, Claire and David decided to travel to Spain to be a little closer to their dream of becoming parents. On 14 May, the couple from Bristol visited the clinic and met their treating doctor, Natalia Szlarb, gynaecologist and Medical Director of IVF Spain.

The couple had already been through 3 failed IVF cycles. Both suffer from medical conditions that make it impossible for them to conceive a child by natural means such as sperm morphology and motility defects, a genetic condition in the family history that increases implantation failure and miscarriage. As a result, the couple decided to approach egg donation to achieve the long lasted pregnancy.

Spain has one of the most advanced and liberal laws on assisted reproduction in Europe, allowing the donation of gametes without disclosing the identity of the donors. This encourages many women to become donors and furthermore it allows reproduction clinics to have bigger donor pools compared to other European countries. Having large donor pools allows assisted reproduction clinics to meet the legal requirements set in Spanish Law: “donors and patients must be similar on a phenotypic level and be genetically compatible to ensure the health of future generations”

We asked Claire and David on their thoughts and impressions about IVF Spain during their visit. They were really impressed with the state-of-the-art technology and techniques that patients have at their disposal.

‘The testing process has been very thorough, there are things that we’ve never been offered in the UK and we didn’t know these were an option really. This was quite important for us. The first thing that we were shown when we arrived, was a time-lapse film of the embryo and, believe it or not, considering where we’ve come from and we´ve been through, we’ve never got to see that before and that is quite good for us, so that give a bit of confidence and that’s just very interesting to see what actually happens; the process when it gets to blastocyst stage’ said Claire and David.

At IVF Spain we are constantly striving to be at the forefront of medical advance. As such, we are able to offer our patients pregnancy rates well above the Spanish average (according to data submitted by the Spanish Fertility Association).

In the case of Claire and David we decided to perform specific tests that could provide us with additional information on why the embryos failed to implant. Among all tests that were carried out, the endometrial receptivity test proved to be decisive. This specific test determines the precise moment to carry out the embryo transfer, thus increasing the success rate.

The test results confirmed a “displaced window of implantation”. In other words, the best moment for transferring the embryo did not match with a woman’s normal cycle. As a result, Claire was prescribed a treatment to find out the best date to carry out the embryo transfer.

Both were very grateful with the received treatment; never before did they get that many information. They knew exactly what was going to happen during every phase of the treatment. “To feel to be taken care of gave us the assurance we needed”

We will be carrying out a second endometrial receptivity test during their upcoming visit to set the exact date for the embryo transfer.

And the runners-up are… 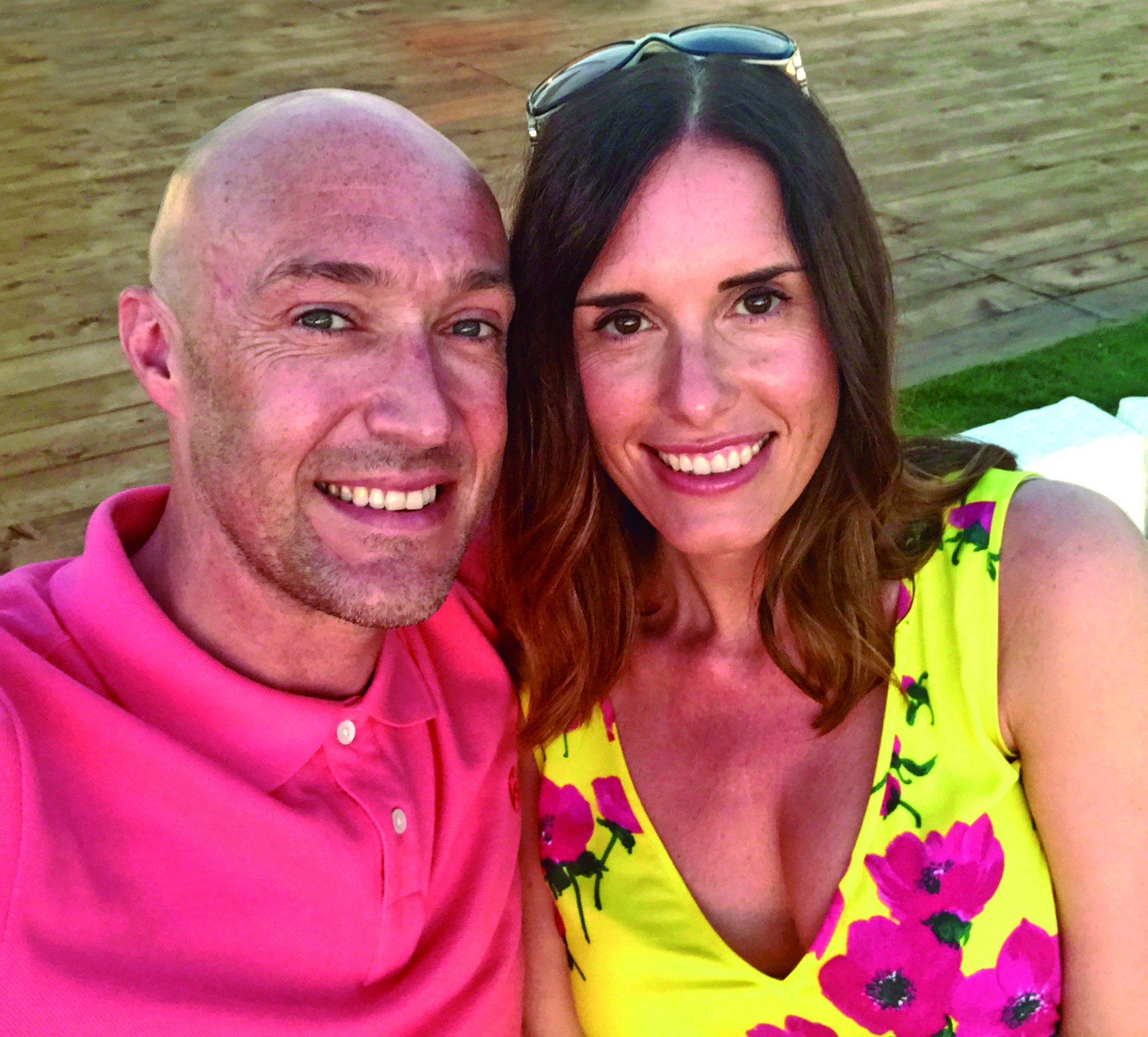 We also chose a runner-up couple for this year’s Fertility Journey: Laura (41) and Ian (44), from Kirklees, West Yorkshire. After five years trying to form a family they decided to put their trust in Dr. Szlarb’s broad experience and in our IVF Spain team.

Laura: ‘On our journey so far we’ve had 7 different rounds of IVF including frozen and fresh transfers and we sadly had 4 miscarriages. We’ve had a very difficult journey over the past few years to try and get pregnant and stay pregnant’.
The couple highlighted the dedication, empathetic approach and detailed information they received throughout their first medical consultation. They were able to clarify all their doubts with the doctor and received a much more professional treatment than in any other clinic.

Laura: Today we had a really thorough consultation with the doctor, much more thorough than we ever experienced in our seven previous attempts in the UK. We uncovered and discussed things we didn’t even understood or didn’t know that were a potential issue for us, which is quite surprising given that we are very experienced going through this.

It has also been a totally different experience for Ian. This time he did not feel like a number, but like a future dad.

Ian: In the UK it felt like we were being treated like a number rather than people. It was just one more case, pay the money and move on without getting a proper explanation.

It has been a totally different experience with IVF Spain.

Laura suffers from endometriosis and polycystic ovarian syndrome, but also suffered from immunological problems in previous treatments. At IVF Spain we wanted to be sure about what was causing Laura not to get pregnant and decided to carry out an endometrial biopsy to check her immune system. The test results showed high levels of NK cells (Natural Killers) which required medication to regulate her bodies’ immunological response to the transferred embryo and prevent the miscarriage (several studies have linked high levels of NK cells to repeated implantation failure and miscarriage).

Laura and Ian will visit us again in September for their embryo transfer. We, of course, wish them the best of luck.

Kathryn: Efa is a dream. She’s tiny and was only 6lb 3.5oz born. She is a sleeper by day but awake all of most nights.

I can’t believe we actually have our miracle here. She’s the best thing that’s ever happened to us and I am so grateful to you all. Richard loves being a daddy. Very hands on and he was very sad going back to work, as will I too.

We also would like to remind you all that Alka and Rhod will be giving birth in August. They wanted to share with us how they got the news of being pregnant and what has been going on since then.

Alka: ‘We discovered that I was pregnant when we were back in the U.K, 2 weeks after our treatment cycle at IVF Spain. The treatment had gone brilliantly. Three great quality blastocysts had developed, my uterine lining had been optimised, and one blastocyst was successfully transferred back into my uterus….It was Christmas Eve when we found out that the cycle had been successful, and we were ecstatic to hear the news! Oh my gosh!… It had worked… and first time too! It was the most amazing Christmas present we could ever have wished for! It was so hard keeping the news to ourselves… but after experiencing pregnancy losses before, we wanted to be sure that the first few months were going to be okay.

IVF Spain were delighted to hear the news and even though we were now in another country, they were very actively involved in our care. They kept a close eye on our blood test results and altered our medication accordingly to help support the pregnancy.
I experienced some bleeding at 6 weeks and with my history, I was terribly worried.

IVF Spain were amazing in their support. I was in touch with them by phone and by email, and they guided me on what actions I should be taking and what investigations would be needed. They were on hand whenever I needed advice, and they truly helped me to stay positive.

We went to our local hospital for a scan to check the viability of the pregnancy and were overjoyed to see the baby’s heartbeat. Everything was looking great! We were so relieved. Luckily the bleeding settled, and the next few months of pregnancy have gone well.  Words cannot describe how it has felt to see the baby moving on the ultrasound scans, hear the baby’s heartbeat…and to feel the baby kicking… Wow!’

Editorial Team
Fertility Road aims to inform and inspire in a manner which is honest, direct and empathetic. Our worldwide expert writers break down the science and deliver relevant, up-to-date insights into everything related to IVF.
PrevKlinikk Hausken Joining the Fertility Journey 2018
Interview with Dimitrius Kavakas from Redia IVF TravelNext