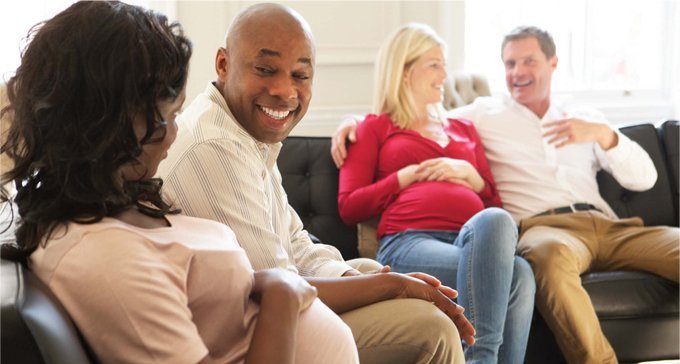 My first experience of a fertility clinic was disastrous. I was forced to undergo invasive treatment in a hospital corridor and ended up refusing to go through with it and walking out. The clinic never contacted us again and we never went back.

Since then I have been through the multiple rounds of IVF and over a dozen clinics. I’ve become a fertility veteran and had every test known to woman and doctor in a bid to diagnose and cure my infertility. Here are my top tips for choosing a clinic and how to separate the good, the bad and the ugly.

I think the first shock about fertility clinics is that most of them don’t look like the sort of place you’d go to create a baby. Over the years I’ve come to expect the unexpected – from the clinic that looked like it was straight out of a Dickens novel to the one that doubled for some sort of New York contemporary art gallery.

One thing, however, I have never got used to is the fertility clinic waiting room. Most places don’t think about the privacy and anonymity that many patients want and need. In the worst offenders, couples are crammed together, chairs facing each other so there’s nowhere else to look, with maybe a pile of children’s toys in the corner to remind you of what you haven’t got.

Three months later it turned out that I was pregnant but the** foetus was ectopic and had implanted in my stomach**. This was a life-threatening situation that could have been avoided if a more accurate pregnancy test had been done at the end of our treatment.

The best waiting room I ever attended had clearly taken the patient experience into consideration in its design. The walls were curved so that each couple got to sit in their own private space. Given that there is always a lot of waiting involved, it made it so much nicer.

Sooner or later in your fertility journey, your partner (or you) are going to experience the horror of the ‘Producing Room’ – the place where men and magazines convene to produce a sperm sample. Most rooms are tiny, often doubling as a toilet or a cupboard. The one at our first clinic had a bucket and mop in the corner, boxes of surgical gloves piled from floor to ceiling, the obligatory well-leafed top-shelf magazine and a very uncomfortable looking plastic chair.

It has always disappointed me that couples are not routinely asked if they would like to be together for this part of the process so that, as a mother, you can say to your child: “I was there.” Whenever we’ve been bold enough to request this, the clinic staff have treated us as if we were weird, despite the fact that generally speaking it does take two to make a baby.

Perhaps if producing rooms were designed more like bedrooms with soft lighting and maybe an iPod with a selection of music then couples, if they wanted to, could choose to start the assisted conception process together in a more natural way.

Nowadays most fertility clinics allow partners to be present for the embryo transfer procedure and that’s definitely a positive thing. But one of the best clinics we ever went to also allowed us to watch the ICSI process when the embryologist injected sperm into the egg. The thought that we might be able to say to our child in years to come that we had witnessed that moment was such a privilege.

In addition, new technology such as the Embryoscope – which takes continuous film footage of your embryos during their first few days in the laboratory – is amazing. Of course, given the choice, all of us going through fertility treatment would rather conceive a baby naturally but these opportunities are unique and special and do offer some compensation for having to confront what is, let’s face it, an artificial and difficult process.

If you are being treated privately (and most women who are going through fertility treatment are) then taking the time to choose the right environment and quality of care is really important. In the busiest clinics, it can sometimes feel akin to being a cow in a cattle market with a number printed on your backside. I went to one clinic where not only the waiting room was full but you’d regularly find people sitting on the stairs. I also recently spoke to a woman who said that her clinic was so busy that they never answered the phone so if she had a question, however small, she had to get on the train from Brighton and come up to London.

The best fertility clinics have time for you and make you feel like an individual. You are given the opportunity to develop a relationship with one doctor who makes the effort to understand your story and, rather like a detective, attempts to work out what the problem is and what should be done. Ideally, that same doctor will be the person who sets your stimulation drug dose and does your scans, egg collection and embryo transfer.

I have been to only two fertility clinics that took this approach – at most clinics, you see different people at different stages and sometimes you never see the same person twice. But at those two clinics, the doctor/patient familiarity and care made a huge difference to how I felt about my treatment.

Sadly even the best clinics have to face failure. One of the things I strongly advocate is that all IVF patients be given a blood test at the end of their treatment to measure the levels of the pregnancy hormone, hCG. No-one likes that trip to the fertility clinic when you’ve started spotting or even bleeding to take a test which you know in your heart is going to be negative. No-one likes the pain of waiting for that dreaded call to give you the result.

But, and I say this from personal experience, you should never be allowed to simply take a urine test at home. I went to one clinic that only offered their patients this option and because the home test looked negative and I was bleeding, I assumed it was. Three months later it turned out that I was pregnant but the foetus was ectopic and had implanted in my stomach. This was a life-threatening situation that could have been avoided if a more accurate pregnancy test had been done at the end of our treatment.

I do feel for the staff who regularly have to make that terrible call to tell you that your test is negative – current statistics indicate that only a third of cycles succeed. At the same time, I have to say that most clinics don’t handle the management of failed cycles well. When a close friend of mine had her first negative result after NHS treatment, she asked if she could see a counsellor and was told that there wasn’t an appointment available for the next three months.

I also heard another story recently where a woman was distraught when she found out her blood test was negative but wasn’t allowed to leave the clinic before going into Accounts to settle up for the test. (Why not at least ensure that all patients pay for their hCG in advance?)

Moreover, there hasn’t been a fertility clinic I’ve attended and moved on from, not a single one, that has contacted me at a later date to find out how I am or where I’m going next on my fertility journey. It has always made me feel as if I’m the black sheep of the fertility clinic, the one who bought their live birth statistics down and, thankfully, eventually disappeared.

One of the disadvantages of the whole process is that even though fertility is big business these days – just spend a weekend at the annual Fertility Show at Olympia to see – patients are still way too powerless in the face of doctors who hold our happiness in their hands. We don’t want to make a fuss; we want all the clinic staff to ‘like us’ so that they will do their best to deliver us the baby we long for.

This means that many people are prepared to put up with the ‘bad’ and even the ‘ugly’.

I have done it myself over and over again. So choose your fertility clinic carefully. Success rates are important but so are other things. Think about the sort of environment, involvement and care you want in your treatment. And when it’s not good enough or there’s something that could make it better, let’s shout about it so things will eventually change.

If as customers we start to demand better clinics and a more personalised approach to our treatment, it will eventually happen, and I have no doubt that results will improve.

The Pursuit of Motherhood is published on February 1, by Matador, priced £8.99. For more information, visit jessicahepburn.com

Jessica Hepburn is one of the UK's leading patient voices on fertility, infertility, the science of making babies and modern families. Having been through eleven rounds of IVF.