Unexplained Infertility – What the hell is that? 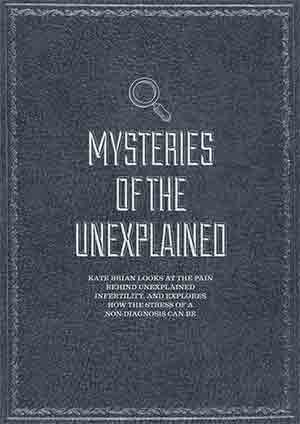 The future of male fertility

When you realise it is taking longer than it should to get pregnant, the first thing you want to know is why you’re having difficulties. Conception is a complex business and there are any number of things that can go wrong, but doctors are usually able to pin down a cause after testing.
For a surprising number of fertility patients, however, no cause can be found despite extensive tests. The result – they are told that they have ‘unexplained infertility’.
Dr Said Daneshmand, Practice Director at the Fertility Center of Las Vegas, says the diagnosis of unexplained infertility is given to about 20-30 per cent of those who are undergoing fertility tests: “Unexplained infertility is a diagnosis of exclusion, meaning that if an infertility patient has undergone all four major diagnostic tests – ovarian reserve, sperm analysis, x-ray to assess Fallopian tubes and uterine evaluation – and all test results are normal, unexplained infertility is used as the diagnosis.
“In the majority of instances, the underlying cause is decreased ovarian reserve – a decrease in the quantity and quality of eggs. And a considerable factor in this is that the blood tests we use to assess ovarian reserve or egg quality do not always reveal subtle decreases in egg quality.”
Dr Daneshmand says that other common underlying causes for unexplained infertility may be related to endometriosis or previous infection. But whatever the reasons, not knowing why you can’t get pregnant can be difficult.
Susan Seenan, Chief Executive of the charity Infertility Network UK, which offers support to those affected by fertility problems, says this is something she is very aware of. “Unexplained infertility can be one of the hardest diagnoses to live with – the lack of a medical cause means there is nothing specific to focus on, and every month there is always the chance you might just be pregnant,” she says. “Often it helps to talk to someone who understands how this feels, and Infertility Network UK has a network of trained volunteers, many of whom have experienced unexplained infertility, as well as a free support line run by a former fertility nurse to help support you.
“And of course, there are countless other organisations in other countries which can offer similar services and support – it’s just a case of hunting out the network that’s right for you.”
Melissa and Robin are only too aware how difficult it can be. They have been trying to have a baby for two years, but despite an array of tests, there’s still no indication as to what’s wrong. They are now waiting to start Intra-Uterine Insemination, and Melissa says she has been determined to do all within her power to try to make a difference. “I have done and bought and experienced everything I can,” she explains. “I am a runner and I gave up running, I started Hatha Yoga, I switched my diet to mainly alkaline and I gave up caffeine and cow diary. I don’t drink much. We are very healthy and we eat well. On paper, there should be no issue.”
Her husband Robin admits that it was far easier for him, as the situation is very different for a man. “There’s just one test for guys and the doctors say ‘yes you are alright’ or ‘no you are not’, and then the focus is entirely on the woman,” he points out.
He explains that what has been most difficult for him was seeing the impact the diagnosis of unexplained fertility had on his wife: “One of the most worrying things for me was watching Melissa going through this, and saying ‘an expert has said this or that and on that basis I will give things up’. There’s all that pressure – are you eating right, doing the right things, are you too stressed – and then I think it becomes a self-fulfilling prophecy. People think they can ask women questions that they’d never ask a guy. It’s very hard for me to watch her going through that because I have so much less pressure.”
It’s inevitable that couples diagnosed with unexplained infertility are keen to do anything they can to make a difference, but given the rapid advances in science it seems surprising that so many people are still left uncertain as to why they can’t get pregnant.
Dr Sami David, a fertility specialist based in New York, believes that couples are often given a diagnosis of ‘unexplained infertility’ when doctors have not spent sufficient time working out the cause of the problem. “It’s all down to people not looking enough – it can be time-consuming and it doesn’t bring in a lot of money,” he says. “They say ‘why bother to make a diagnosis, let’s do in vitro and the couple will have a baby’. They are taking an easy approach for themselves but it’s more expensive and traumatic for the couple. No-one likes to take a long history anymore, but I like to be a detective. I say to patients, ‘let’s not give you drugs; let’s find out why you are not getting pregnant’.”
Hannah and her partner would certainly agree that there’s not enough time spent trying to work out what might be wrong. It took them five months to conceive their son, but Hannah hasn’t been able to get pregnant again. They have been trying for more than three years now, and have been told their problems are unexplained. Hannah was referred to a gynaecologist, but feels that doctors were not really interested in finding out why she is experiencing fertility problems. “Every time I went I saw a different person and I had to keep telling them the whole story, over and over again,” she explains. “They kept saying ‘you’ve had one child already so don’t worry about it, it will happen naturally again eventually’. They weren’t actually doing anything at all and I didn’t feel they wanted to help me. I asked for counselling but they said they couldn’t offer any.”

Trying to get pregnant was costing a lot of money. I can’t afford £50 a fortnight for acupuncture. I started to wonder if I was not better off spending the money enjoying myself with my husband.”

After trying Clomid unsuccessfully, Hannah and her partner were told they don’t qualify for any more help from the NHS in the UK as they already have a child. If they wanted further testing or treatment, they would have to pay for it themselves.
Hannah is doing what she can with healthy eating and lifestyle, but simply can’t afford all the therapies she might like to consider. “I’m trying reflexology and I would like to try acupuncture, but it’s between £60 and £90 for a session which is a lot when you are trying to save for IVF,” she says. “I could try acupuncture and it could work for me – but I could try it and it might not do anything, and then I would have wasted hundreds of pounds which I could have saved for IVF. I do find it hard not knowing why I can’t get pregnant.”
Professor Sheena Lewis, who is based at Queen’s University in Belfast, believes she has found one common cause for unexplained infertility. Her research suggests that in 80 per cent of couples who have unexplained infertility, there is sperm DNA damage. This isn’t something routinely tested for in clinics, but Professor Lewis says if men know there is DNA damage, they can take action: “We have now found a detectable cause,” she says. “This gives them an opportunity to address the problem, with lifestyle and dietary changes such as using antioxidant supplements, eating differently, giving up smoking, whilst also discussing ICSI with their fertility centre as an alternative to IVF.”
The idea that lifestyle can have an impact is something Dr Marilyn Glenville encourages couples to consider. The leading nutritionist specialising in women’s health and author of the book Getting Pregnant Faster. “I think that so many couples are given this diagnosis of unexplained infertility because the other causes such as diet, nutritional deficiencies and lifestyle factors have not been looked at,” she suggests. “By making changes in your diet and lifestyle and correcting nutritional deficiencies it can make a huge difference to your fertility. I know it works from clinical experience but it is also borne out by the evidence from medical literature.”
Dr Glenville says smoking, alcohol and caffeine are key culprits when it comes to fertility. She suggests supplements of other nutrients and vitamins, but explains it can take three months for lifestyle changes to start to have an impact.
The idea that diet and lifestyle can hold the key to unexplained infertility is something Dr Sami David investigates too. He finds small things can sometimes make all the difference for his patients. “Lifestyle changes are important,” he explains. “If people are doing Bikram or hot yoga, the body heats up as it’s very hot in the room. Eggs don’t do well when they are heated up and nor does sperm. I’ve had numerous patients who have stopped hot yoga and got pregnant.
“Then there’s the man – I sometimes talk to a husband who is out on the golf course and who is exposed to all kinds of herbicides and pesticides on the course. Or perhaps he is sitting with his laptop on his lap and that’s affecting his sperm – there are some easy fixes.”
The problem for couples with unexplained infertility is rarely a lack of advice though – but rather too much of it. When you don’t have a cause, it’s all too easy to start to blame yourself and to question everything that you do. Making sensible lifestyle changes is never a bad idea, but it can be hard to know where to stop. Melissa realised that her determination to do all she could to improve her fertility was starting to make her unhappy.
“I just got up one day and thought enough is enough,” she says. “It was really miserable. I like cheese and sometimes I just want some good old- fashioned cheddar. I love a pain au chocolat now and then on a Sunday morning – you have to keep it in perspective. Trying to get pregnant was costing a lot of money. I can’t afford £50 a fortnight for acupuncture. I started to wonder if I was not better off spending the money enjoying myself with my husband.”
Melissa hasn’t reached the end of her journey, but she has come to a place where she feels she can cope with what each day has to throw at her, and she’s doing that by thinking more positively about her situation. “It can become all-consuming and you have to take a step back and, as difficult as it feels, you have to get it into perspective,” she explains. “I have realised that I have a lovely life, a gorgeous husband, a dog, my own business. I live in the countryside and it’s a fantastic existence. Even if my dream doesn’t happen, I still have an amazing life.”

The future of male fertility